What a day. Let's just ignore work and the impressive work that my fellow partners are doing down in New Orleans right now.

Today was just fun. Today I had the opportunity to return to a world that I though I had left several years ago, sports media. Sure nearly 3 years at KJR-AM Seattle would make me think this is routine, but Seattle Sounders FC is NOT routine. They aren't like your normal sports team in Seattle. They don't just have Press Conferences to announce signings of players, but also FAN conferences.

Today was a day when I got invited to help welcome an awesome Swede to our fair city and our soonly successful club. Today I joined the supporters, the kids, the suits and the media in showing that there is only one Freddie Ljungberg and there is only one Sounders FC.

Tonight it is a timeline, some multimedia and quite basic thoughts with a few quotes. I've written enough on the potential impact (a link if you need a reminder).

Off work early I head up to the North Lot as the email said. I'm the first one, because I'm that early, so I get to tell the attendant that they are likely to get a couple hundred people with the same note trying to park for free. He wasn't happy, but he let me in.

To kill the next hour and a half I head over to the FX McRorys to enjoy a few before the conference and hang with the ECS as a time kill. Happy Hour is good to me and I enjoy two pints of Hale's Cream Ale while talking about the beautiful game with a handful of the roughly two dozen that showed up for the early meet. Most of the time was talking to Greg and Keith about what they have planned, the benefits of membership, and a touch of pimping my blog.

Their plans kick ass, and I'm glad we got seats down near the South End, because I will certainly participate more than not.

When we walked over the Qwest Field home of the XBox 360 Pitch there was a line of a couple hundred, a mix of family, young adults and older corporate types. It was the diversity of Seattle on display really, all colors, all nationalities, all who just loved the game from the kid with the size one ball to the man who filled the largest Henry jersey ever made. This was our city and our team coming of age.

The ECS grew got to the front quickly to set up their table. The organization wants to develop a strong supporters culture that goes beyond mere members and ticket holders but one that chants and sings so they had asked the Emerald City Supporters to bring some flyers and business cards and every single person who walked by had to pass that table. 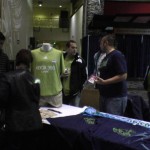 Inside the fan conference the idea of club and country was everywhere. There were Swedish and American flags and the Rave Green of the Sounders as well. The same went for the kits on the fans, Yellow, Red and t-shirts in Rave, Sounder Blue and white with the crest. The crowd was probably about 250 on an early Tuesday evening. 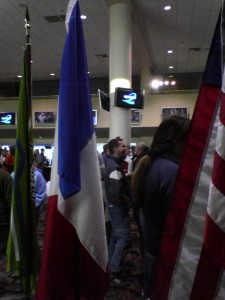 But the excitement didn't really start until the band played the Sounders Theme(not the current band at link). That band answered many of our questions right there. They knew the theme and they didn't suck. At this point that's enough, and I look forward to more.

Today also I saw a tradition continued. It started at the George and Dragon when ECS made certain to get Drew Carey a scarf. It continued with Joe Roth at a later announcement. Somehow Kasey Keller got one before his presser, and today they scarfed both Kevin Calabaro and Freddie Ljungberg.

Video of this isNOW HERE
KC and Freddie get ECS scarves

That's a fine tradition to start. I don't care if its borrowed from somewhere else, but it works. Well done ECS.

Plenty of other places have great stuff from the full on Press Conference, but here are some of my highlights from the Fan Conference.

First from Kevin Calabro and the video montages - the team is going to emphasize the team/family of successful business, communities and fans that are participating. We are all partners, everyone of us.

Joe Roth had some dang amazing lines
"We aren't looking to just be an expansion franchise but a successful team. We won't accept struggling in the first year like mumbling Toronto or San Jose"
"When picking our designated player we looked for someone who could help us succeed in the Champions League (CONCACAF of course) and soon"
"Our goal is to shortly be one of the top 10 or 12 teams in the world"
"I told him [Freddie Ljungberg] that he really would only want to play in Toronto or Seattle because of the fans, and since I own Seattle how 'bout there?"

Sure, he's big and he's bold, but that's what we expect. This a guy has produced 46 movies or TV series, he isn't going to think small. If you've read my stuff before I'm a huge fan of going bold.

Adrian Hanauer gave his usual close to the vest speech, concentrating on Freddie's character, his leadership and his intelligence on and off the field.

What convinced me that Freddie was a great acquisition is that he mentioned that the reason he chose to come to MLS now was because he didn't think it would be fair when he was too old to be in top form and that the league and its fans deserve the best. Other highlights include;
"MLS is a strong league with competitors that don't quit, I look to show them some things a little quicker a little more technical"
"He [keller] should be happy that I'm only scoring on him in training"
"I like Starbucks" Ok, that last isn't true, but he did visit one during his current stay.

Today was a good day for the team, for the league, but most importantly for us the fans. Sounders FC continued to show that it is going to do things a little different by having Fan Conferences and by cooperating with independent supporters groups. We got our first look at the band and it captured the tradition, and we got a player who gives the team a face and respect on the international stage.

Remember the goals. Competing in the CCL and filling the stadium. Today helps that.