Finally, December is here… meaning the Columbian Footballer Freddy Montero’s conract with Deportivo Cali is coming to an end. So, what will happen next with this former Golden Boot winner? The only thing that’s certain is that an American club owns 65% of Montero’s contract rights… and it’s rumored that the American Club in question is none other than Sounders FC! 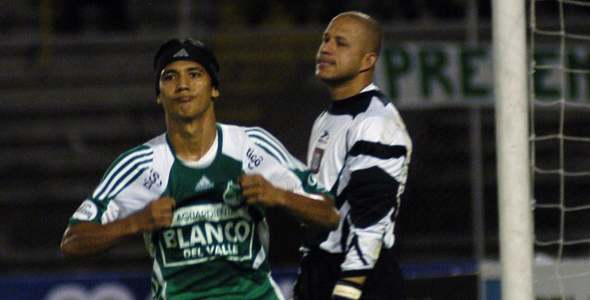 That’s right! There’s a strong possibility we’ll be adding another Freddy (or Freddie) to the already growing Sounders squad. At this time it looks like the Spanish Club Sevilla holds the other 35% of his contract.

If it’s true that Sounders FC hold a majority of the head-banded wonder’s contract then we have two ways of benefiting from this.

1. We get a great striker/attacking midfielder to pound in the crisp crosses from Ljungberg.

2. We’ll receive a pretty penny from Sevilla to obtain the rest of his contract rights. Then we take this new cash into the transfer market at some point.

Personally… I’m hoping for the first. Let’s hope he can come to the MLS and make a name for himself. (the picture seems a bit reminiscent of a North American CR7…)

This is the first of many posts coming your way! We've had a change in writers for the Sounders FC Offside. I'd love to hear your feedback... let me know how we're doing.