I win you, please

Share All sharing options for: I win you, please

So I recently discovered that many of you didn't know that I am running for the Sounders FC Membership Council. I quite simply see the role of the council as a place where fans have a voice, a method to open up the team to non-traditional marketing (I call this soccer evangelism), and to guarantee that Seattle Sounders FC represents the best of the Puget Sound.

The following is from my webpage on why I belong on the Council representing YOU.

Or why Democracy in Sports matters, and the Sounders FC model will change American sports.

Some of you may have heard that I am still making an effort at being elected to the Membership Council. I am hoping to get elected so that I can work towards a team that fills ALL of Qwest Field, that wins Cups on the international stage and that does so in a sustainable manner. Rave Green should be a symbol of victory through cooperation, not destruction and antagonism.

Here's the Standard for Qwest 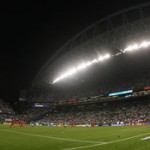 That standard for the current team should be having the Nest, as well as the full upper levels with seats filled. It should do so in a manner that maintains a middle class feel in the lower bowl (likely at the ends and wings) so as not to become the NBA with too many corporate types ignoring the game. With 14 or 15 regular season home games, the US Open Cup, possible SuperLiga/CCL and other Cups there is a possibility of about 30 home games in a single season.

A winning club that fills all of those seats can charge less than the NFL and still make much more money from gameday tickets/parking/concessions if they find ways to fill the whole stadium. The first way is of course to win, but secondly is to capture the nature of the Puget Sound in the stadium and in their off field relationship with fans. Last night's meeting with the Supporter's Groups is a great start.

They need to continue the positive overtures that they have already made, but the Supporter's Groups also need to understand that they are there to supplement, not supplant, the game on the field. In my opinion that's quite simple. No fires, No smoke and no chants that favor death (put them against the wall and shoot them).

Sounders FC should also learn from the Tim Ruskell Seahawks and have a team for which the community can take pride. Good people who play a game and make money. We aren't jealous of the Seahawks, we are proud of how they represent the people of the fair Sound.

Lastly, maybe just my pet idea, but have a team that does what it can to be green. The team will already feature green on its uniforms, but it should also be green in its programs, its giveaways (I hope to see reusable shopping bags) and in its administration. This is very Seattle for sure, but it is also a way to capture an emerging market and gain positive press outside of the sports pages/sites/stations.

Again - I win you, please.
Democracy in Sports with a purely Seattle attitude

Vote Dave Clark while you still can
I am available via email, or during the season you can see me in Section 214

If you haven't bought tickets yet, give me a mention.

Lastly, please continue to put in votes for me. There are only two people on the council so far. Iain Starr is joined by Greg Mockos of ECS.