Two scientists, Phil Edwards and Ian Roberts of the London School of Hygiene & Tropical Medicine recently wrote that "obese people are disproportionately responsible for high food prices and greenhouse gas emissions because they consume 18% more food energy due to their greater body mass -- and require increased quantities of fuel to transport themselves and the food they eat." Well that kinda’ sucks for those people and for us as well. Still, you have to love fat people and the comedic value they offer (The 10 Best Fat People Internet Videos).

As a dawn of a new era draws closer and closer for the Seattle franchise, developing a crop of star studded talent gets even more important. Until the 09' season officially starts, the team will be underway scouting the globe for the right pieces and parts for the perfect roster and should consider the thought, "Is bigger better?"

I pondered this question if a big boy would have a positive or adverse affect on the overall level of play on the pitch. Let’s take a look at the biggest boys in MLS, in their respective positions and look at their affects on their team: a detriment (Belly Fat) or a plus (Muscle Mass). 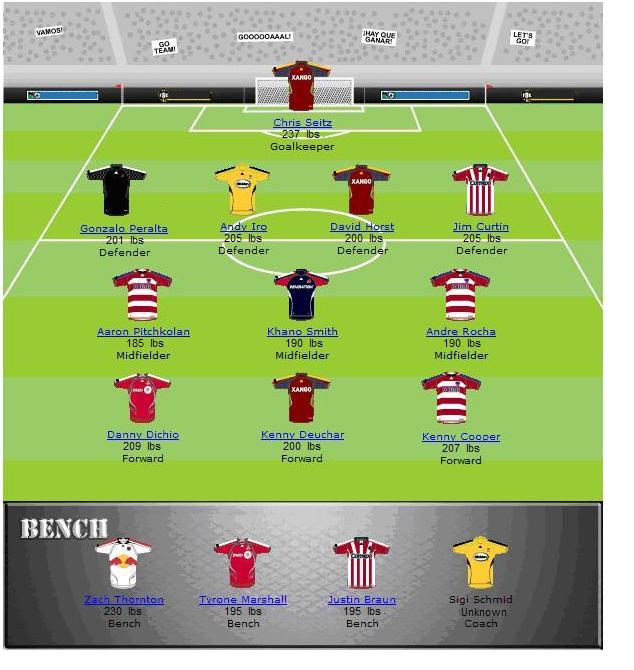 Forwards
Danny Dichio (Toronto FC – 209 lbs): As the biggest forward the league, Danny has truly been pulling his weight this season by guiding his team to a strong start this season. Toronto FC held an unbeaten streak of 7 of 8 games this season, a superior achievement in contrast to last season's efforts. Danny offers a pedigree ranging from 6 of England’s top clubs and even a stint in Serie A for Sampdoria. Danny offers a young Toronto FC the necessary spark to turn last seasons disappointment into this years playoff reality. Verdict: Muscle Mass.

Kenny Cooper (FC Dallas – 207 lbs): FCD had to order a special jersey for Kenny because even the XXXL version couldn't fit over his massive biceps. Kenny is truly beauty and beast on the pitch. His potential could lead the Hoops, who’ve never missed a playoff appearance in their existence, to a possible championship berth in a weak Western division. Kenny’s explosive style and creative pace on the ball is the spark that an inconsistent offensive unit needs. Verdict: Muscle Mass

Kenny Deuchar (Real Salt Lake – 200 lbs): RSL has struggled to find the performance needed to succeed in the league. After excelling in the lower divisions of Scottish Football, Kenny is currently struggling with his love of medicine (part of his reason for leaving Europe) and balancing his career on the pitch. His balancing act may be a key part of his struggle to find form on the pitch this season. Verdict: Belly Fat

Midfielders
Andre Rocha (FC Dallas – 190 lbs): Out of Sao Paolo, the Brazilian on loan from Clube Atlético Paranaense was brought in to fill the vacancy at right back left by Denilson. His ball control, short passes, and fast-paced, physical style have allowed him to have a great start to the season (5 assists-team leader, 2nd most in the league). If FC Dallas is going to make a deep run, Rocha must be a key component for their success. Verdict: Muscle Mass

Khano Smith (New England – 190 lbs): One of the most famous football players in Bermudian history, Khano has 20 national team caps and 7 goals for country. For club, Khano has mustered 7 goals as well, a figure that is much more medicore considering his 73 appearances for the Revs. While it might be a product of the system, Khano has not truly been productive, and has seen his time on the pitch limited. It is time for the Revs to ditch the lad for a better foreign prospect. Verdict: Belly Fat

Aaron Pitchkolan (FC Dallas – 185 lbs): Appearances have been limited, and playing time more so, but the Native Coloradan still maintains his spot on the Hoops lineup since his signing in 2005. While brilliant at West Virginia, his great form at the University has not translated to the MLS. His development in the league has been a test of patience. If Dallas continues to struggle, expect to see Aaron hit the trading block at some point this season. Verdict: Belly Fat

Defenders
Gonzalo Peralta (DC United – 201 lbs): Our Torres look-a-like has struggled slightly as has DC United as a whole. However, much like last season, the team has picked up the pace and Peralta has been a key part of it. His experience and leadership gained in the Argentine 2nd Division as captain at Club Almirante Brown will prove as a key factor for a another top place place finish in the East and a late post season run for DC United. Verdict: Muscle Mass

Andy Iro (Columbus – 205 lbs): Born and raised in Liverpool, the Englishman was selected as the 6th pick in the MLS Supplemental Draft by the Columbus Crew. His success at the University of California Santa Barbara and the fact that the defender towers at a height of 6’5" will serve Columbus well if Iro maintains his development. Verdict: Muscle Mass

David Horst (Real Salt Lake – 200 lbs): The 6’4" defender from Old Dominion was selected with the last pick in the first round by Real Salt Lake to fill the center back slot. The Pine Grove, Pennsylvania native may make a great addition in the future, but with a roster of only 5 individuals with 4 years or more experience, the necessary mixture of experience and youth is not helped by Horst’s addition. Verdict: Belly Fat

Jim Curtin (Chivas USA – 205 lbs): Curtin served as the iron curtain that helped the Fire to a runner up finish in the MLS Cup (2003), MLS Supporters’ Shield in 2003, and two US Open Cups (2003, 2006). Defender of the year in 2004, Curtin once played 70 straight matches. Plagued by injuries down the strech last year, his return to health can play a major factor in getting Chivas back to best in the West. Verdict: Muscle Mass

Goalkeeper
Chris Seitz (Real Salt Lake – 237 lbs): As the biggest mofo in the league, Seitz is possibly the only saving grace at Real Salt Lake. While he has only played as many games as there are fingers on my hand, he has been used as a vital piece for the U-23 and U-20 teams. His potential truly poses a threat to the playing time of the aging Rimando. Verdict: Muscle Mass

Coach
Schmid (Columbus - ??? lbs): He needs at the very least a playoff appearance, after Columbus' three straight absences (two under Schmid), to keep his job, and so far he's pushed the right buttons. Verdict: Muscle Mass