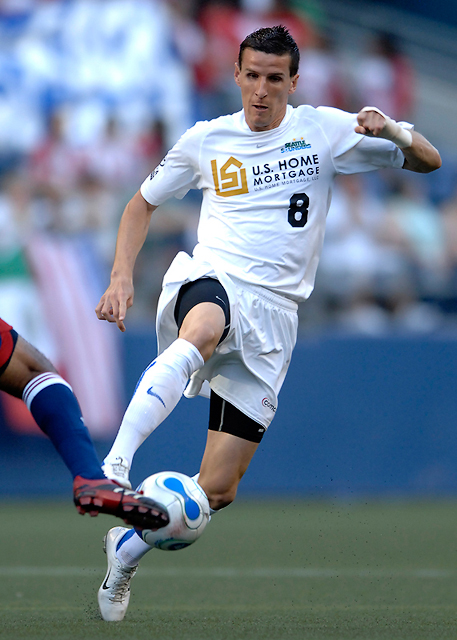 The tall and lanky forward and midfielder hails from France where he began his professional footballing career at the age of 17 as a defender at Stade Rennais in Ligue 1. After failing to break into the first team and spending most of his 3 year stint with the reserves, Le Toux left on a free transfer to Ligue 2 side, FC Lorient. He spent 2004-2006 with the club where he made 15 appearances on defense, recording a single goal, before his release.

With his arrival to the USA, the lad's luck began to change for the better. Le Toux went on trial with FC Dallas, but could not agree on contract terms with the club ($20K/year developmental contracts anyone???). Club officials refered him to the Sounders, who had previously scouted the Frenchman. Le Toux signed with the Seattle Sounders, who brought him in to shore up the defense. However, in his first season he ended up playing at outside midfield and forward. Le Toux notched 10 regular season goals and 22 points to establish himself as the MVP of the USL first division. 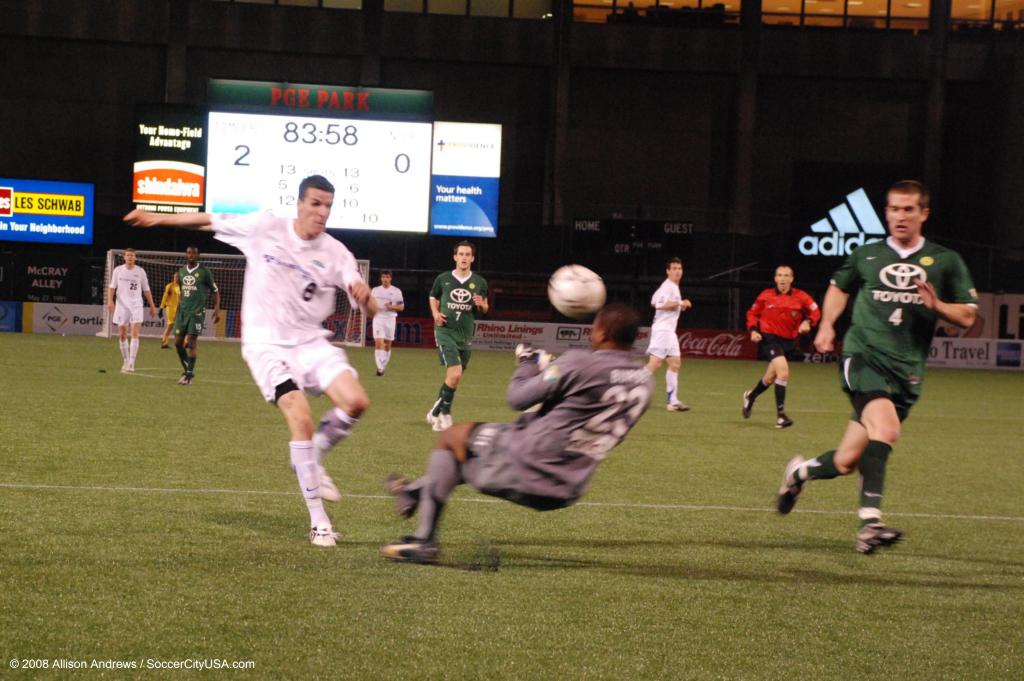 After his successful 2007 campaign, Le Toux received a trial offer from English 3rd division club Cambridge United. However, with impending news of Seattle's MLS expansion, it became clear that the Sounders' star player would take his chances in the MLS.

On May 8, that rumor became official. Some reports indicate that Le Toux signed with Seattle Sounders FC for as many as 5 years. According to reports, MLS is paying the strikers salary for 2008, a cool $84,000.

So far he is earning his pay. Le Toux is 3rd in the USL's first division in both points (11) and goals (5) through 11 games. In his most recent match, a 3-1 victory against the Minnesota Thunder, Le Toux was downright dominant. He had a hand in all 3 of the Sounders' goals.

The first goal came on a rebound from a 12-yard strike by Le Toux. 20 minutes later, Le Toux was taken down hard on the left side of the box, resulting in a penalty. The third, Le Toux put away himself when a corner kick landed at his feet near the far post.

Le Toux's continued improvement and good form has helped the Sounders to overcome a slow start and a rash of injuries. The squad is currently tied for 3rd place in the USL first division with a 4-2-5 record and 17 points, just 5 out from the league leading Vancouver Whitecaps, with 22.

Sounders FC GM and minority owner Adrian Hanauer has nothing but praise for the young man. "Sébastien is an outstanding young soccer player with loads of upside. He has tremendous physical capacity, he is very good technically and tactically, and has the potential to be a very effective MLS player," said Hanauer. "Sebastien is also a great individual, and has the kind of character that our fans will be proud of."

Other qualities that attract scouts and coaches alike to Le Toux are his tireless running and his versatility. Sounders coach Brian Schmetzer originally installed Le Toux in the central defense, but moved him to midfield to take advantage of his high work-rate. According to the coach, at the MLS level, Le Toux has the ability to play either as an outside midfield or withdrawn striker in both the 4-4-2 or 3-5-2 formations.

In addition, according to an October 4 article on ESPN by Andrew Winner, Le Toux is one of the latest attacking prospects whose careers were sparked by Schmetzer. Other quality attacking players who have passed through Seattle and moved on to greener pastures include Brian Ching (Houston Dynamo), Maykel Galindo (Chivas USA) and Cam Weaver (FK Haugesund).

Schmetzer's ability to develop talented young players into quality attacking options may pay dividends for Seattle's MLS side in the long run, both on the field and financially. There is no word on his long-term career plans, but many successful American players, Beasley, Dempsey, and most recently Altidore, just to name a few, have used the MLS as a launching pad to a career in Europe.

However, not many foreign players have done the same in the MLS. Le Toux is a very interesting case considering he has gained the majority of his success after changing positions. Perhaps with his rising star, he could serve as an example to other foreign players that the MLS may be a decent place to build a reputation worthy of European club football. Such a trend would be an invaluable benefit for the league.

"My first idea was that you don't come to America to [earn] a lot of money playing soccer, so I know that. I came to prove to people that I can play at the highest level in the USA," Le Toux said. Perhaps a couple of spectacular years at the USA's top level can earn Le Toux a ticket back to Ligue 1 in France and a fat transfer fee for a young Seattle Sounders Football Club.

Despite all the hype and goal scoring, Le Toux seems to be a humble character with his head in the right place. None of his teammates seem to be miffed by his (relatively) large contract or his inclusion on the new MLS team. In addition, his great motor, soccer instincts, versatility and nose for goal are great attributes for any club. I am just glad he did not end up in Dallas. I am sure he is too.

Best of luck to you Sébastien! We look forward to seeing who you will be teaming up with for 2009.

Some highlights and interviews:

Greeting his fans back home:

He knows how to celebrate:

Le Toux takes out the trash (Minute 2:33 of video)

Interview with Le Toux (Apparently he prefers Seattle to Dallas. Who the hell wouldn't?):