Henry staying on the MLS radar

Share All sharing options for: Henry staying on the MLS radar 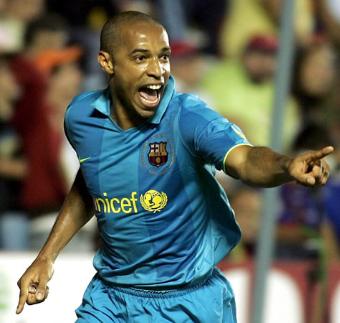 French striker Henry spent this past weekend with his good friend and compatriot, NBA star Tony Parker, cruising the Big Apple and playing in the Steve Nash charity soccer game. Naturally, his presence in NYC was hard to ignore for both MLS fans and the press.

So, is the MLS in his future? Henry has made no secret of his affinity for American culture and has even stated his interest in playing in the MLS in the future. When questioned about a move to America and playing football, the all-time Arsenal scorer responded, "Why not? I love America. I love it here. And, whenever I come here, I feel free. Hopefully, one day."

The question is, when will the move happen? How soon can we expect Henry to bring his pedigree and starpower stateside to rival Beckham? He currently has three years left on his Barcelona contract. When Beckham left Real Madrid, his contract had expired and therefore, Becks came to the MLS on a free transfer. The price was right ($0) for MLS, which currently handles teams' financial transactions involving designated players.

If Henry comes to the MLS in 2009, as many predict, the MLS would have to pay the transfer fee for the player, estimated at over $25mn. However, can you put a price tag on the value of not only an elite player, but a marketing symbol to boot (ask the LA Galaxy and the people who calculate the attendance)? Even at the age of 31 and on the downside of his career physically, the price tag is no issue.

Much like with Beckham, it is not a question of if, but when. "You never know what's going to happen. But, at the moment, I'm still over there," Henry said.

So where will Henry land in the MLS? it appears that Henry already has chosen the apple of his eye, NYC. "I'm here on vacation, enjoying the town," he told The Associated press. "It's an amazing town. I love New York. It's not the first time I say it. Sometimes I do get recognized, but I feel free when I'm here, so that's the most important thing. I love it."

According to Dave, plenty of people in NY recognized him this weekend at the park. Don't despair Seattle fans, maybe he wants to go to a smaller city. Maybe he would feel more like he was in England again in the beautiful Seattle weather.

The Seattle ownership had already made it plainly obvious that the money is on the table. Let's just hope that Red Bulls have already filled their DP slot with Riquelme by that time.

There is nothing I would like to see better than Henry in off-puke green in Summer 2009 However, it looks more likely that Red Bulls fans will soon have their Altidore-broken heart mended by the soft-spoken and smooth playing Frenchman.