Nate Jaqua, native Oregonian, has rejoined the Houston Dynamo and will make an appearance as early as mid July. This almost counts as a signing for the Sounders, as the man has repeatedly expressed his interest in playing in the Pacific Northwest and is likely to be traded to the Sounders for the 2009 season.

Brian Ching has also expressed interest in returning to the City and the coach that made him the marginal national team player that he is. I, for one, would welcome him with open arms. 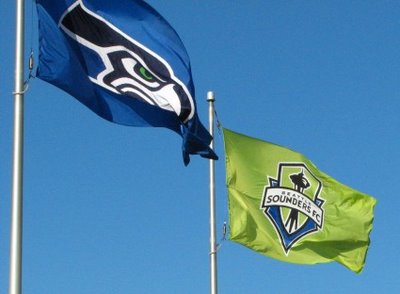 The Sounders FC flag was seen flying over Qwest field next to the Seahawks flag. A truly beautiful sight to behold.

David Falk , of GoalSeattle and Seattle Soccer Examiner fame, wrote an interesting piece about the reaction to Chief editor of the Seattle Weekly Mark D. Fefer's soccer bashing op-ed. Apparently, the ignoramous struck a chord with some local Soccer fans.

My personal favorite:
"You embarrass yourself my ignoring the statistics and evidence that point to soccer's slow, but continuing and significant, growth in the US. Do your research and try writing a more nuanced piece."—phillypride

I agree, and you can go to hell Mr. Fefer. People who are uninformed about subjects and refuse to put the time and effort into learning more just make themselves look foolish. Sort of like I always tell my friend Akeem. You can find a copy of Fefer's shoddy journalism here.

The Tacoma News Tribune reported on July 8th that the Sounders FC will create a youth academy to grow elite soccer players from local talent.

Adrian Hanuaer is looking forward to cooperating with existing youth squads around the state:

"What we wanted to do to begin with was partner with Washington Youth Soccer," said Adrian Hanauer, Sounders FC general manager. "As opposed to choosing one particular club, we wanted to start at the state level and say, ‘Look, we want to be as agnostic as possible and we want to be partners with everyone.’ So, our intention is not to build a club that competes with other clubs around the state."

You can find a copy of the articlehere.

Finally, 17,000 season tickets have officially been sold, despite the fact the season is 9 months away and we have one player. GO SOUNDERS.