Tradition and history are hard for a young team and a young league. In Seattle there is a team that is trying to connect to a 30 plus year journey, but there are also attempts to create new history as well. The Emerald City Supporters did there part. Sometimes in connection with the team, as in the March to the Match and others like that HUGE tifo display.

While the fans gathered at pubs, bars and restaurants, the action in SoDo/Pioneer Square was vibrant. I witnessed the Elysian have to have a door guard in order to stay below fire capacity. The ECS tells me that Fuel and McCoy's had to turn people away as well.

The pre-game at the match carried a tribute to the international nature of the sport. A tribute that seemed fitting as the US National Team attempts to qualify for World Cup 2010. 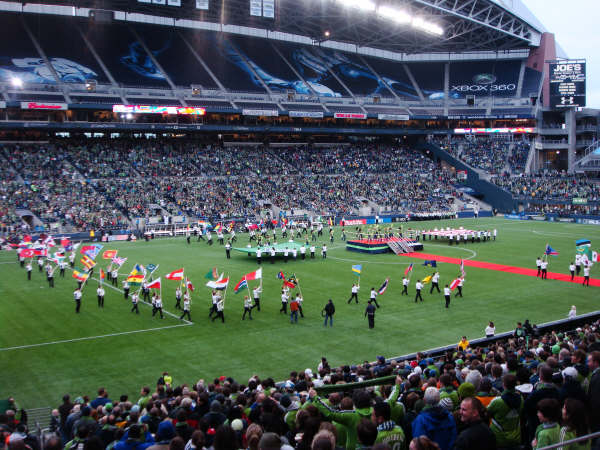 From there was the moment that John Harkes referred to as "Like Europe" reminding him of a match at Liverpool, for Sounders FC fans were Scarves Up. And 80% of the crowd stood for the entirety of the match.

I caught up with Greg Mockos one of the ECS capos and Alliance Council-member and asked him about the opening display. "We are very proud of how the TIFO came across ... but this was our coming out party. We got 100 more paid memberships and will continue to grow. There are now 400 paid and 600 signed up."

One of the affiliates of the ECS standing in the section wrote beautifully on the GoalSeattle forums about the connection he generated with Fredy Montero, specifically actions that Fredy took post-game when the team came back out of the tunnel and connected with the Brougham End in ways that few teams in North America bother.

There was one more twist to this tale. Fredy had removed his rave green jersey and stood there triumphantly in his white undershirt. In a series of events that are still a blissful blur to me, Fredy tossed his jersey over his shoulder....

When I came-to, I held a cold, soaking wet piece of brightly colored fabric in my hands. Before so much as one thought entered my head, my face was buried in the shirt and I was nearly in tears. Those around me grabbed my shoulders, screamed in my face, reveled in the moment with me. I let out some guttural bellow I didn't know I was capable of and I stood there with this cloth - the field now void of team members - wondering if my reality was a myth, a legend, or simply an incredible dream.

Steve Zakuani and Zach Scott (I think it was) also gave their jerseys to lucky fans. Zakuani said the following about the atmosphere;

It was by far the best atmosphere I've ever seen in a stadium, whether it's playing or watching. It was unreal. And a lot of the guys felt that way too.

The man spent his formative years in London and on the Arsenal youth team. Thursday night he and the rest of the team increased their connection with the team to ensure that we didn't see a one time event.

When I asked Keith Hodo of ECS for his most special moment, it was the first goal by Montero.

but my most significant moment was Montero's first goal...and it was so special because it was the Golcedor! First game, first goal, and literally the ECS just went crazy... first time I've ever been at a match and been happy that it wasn't terraces but actual seating as I would've been right at the front of the crush

As the non-MLS soccer fan at FoxSoccer.com said from his perch in front of Los Angeles area TV

A festive footballing atmosphere and fun in-game experience can more than make up for the … how do I say this politely… sometimes sloppy level of play in MLS. You can find this fan experience in Toronto and Seattle. Sadly, it’s not here in LA and I don’t see it in many other MLS markets either (and yes, I’ve been to games in many MLS cities). But for today I will see the glass as half-full and see this as a sign of progress for MLS.

The rest of league now has a new benchmark and it is the Seattle Sounders.

There are 14 more league matches at home. But the fans in Seattle have set a high bar for themselves, but with great expectations comes great responsibility. Next up RSL, and more new traditions. I will be Marching, join us.

Dave Clark in the March