When he starts Sounders FC wins, OK maybe that's a little bit of my own personal hyperbole, but he did start last Saturday against the San Jose Earthquakes. The number one pick out of Akron also scored, and was credited with the secondary assist on the Brad Evans goal.

Steve now has 2 goals and 2 assists on the young season, in just 283 minutes of play. Today I had the opportunity to catch up with Steve after his strong performance and heading into Tuesday night's US Open Cup match. This interview was conducted by phone during a break for my workday. 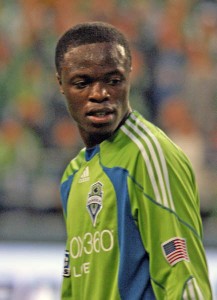 Dave Clark: Every player I have ever met wants to be a starter rather than a reserve, but why is it that you think you would be better starting a match than coming on as a sub?

Steve Zakuani: Of course I want to start, but as a starter what you get is that you know the pace of the game at the beginning. It can take five or ten minutes to adjust to a fast game or slow game. When you start you have a better idea of the pace, and its easier to make an impact.

Zakuani: Whenever I take the pitch I always try to show coach what I can do. From last week's game I think I played well, but each game might have different needs, because of the opponent. If I am on the bench it is OK, if I start it is good. I will be a professional for a long time. Sometimes I will start, and sometimes I won't, but each game the coach will make the decision what is best for the team.

DC: Tomorrow night there is a US Open Cup Qualifier. Some MLS teams have a history of not taking these very seriously. How seriously do you expect the Sounders to take it?

Zakuani: I think we'll take it seriously, because a loss is a loss. After last week's win a loss would kill morale. Plus, we are not a first team or second team but Sounders, so a loss would hurt. I expect we will put a strong team out there, sure some guys will rest and the healthy guys that haven't played much will get time. I want to play as well, but no matter what we want to win.

DC: You said that you are not a 1st team or 2nd team, but Sounders. What do you mean by that?

Zakuani: We all train together and have a good camaraderie. It isn't like there are reserves and first teamers. I have encountered that in the past, but not here. It is still a Seattle Sounders game, no matter who plays. A win is a Sounders win, not a first team win or reserve win. If we lose it is a Sounders loss, not a loss for the first team or reserves.

DC: You've been playing a kind of Left Mid, or Left Wing hybrid, a forward mid that attacks more than defends and have had two different style of player behind you formationally. Is there a particular style of Left Back, or Left Wingback behind you that you prefer?

Zakuani: No, attacking is my game. I play up more than most it is the player that I am, but I have do some defense as well. I know that with who ever players plays defense I have some one behind me. With Sturge he may be more attacking because he plays midfield as well, but with Zach he is more a solid traditional defender. Each brings their own game and it is nice to have a solid defense and cover behind me no matter who plays.

DC: Some analysts have called your two goals, lucky or fortunate and others have said that you create those opportunities by putting your self in the right place at the right time. Does it matter to you if a goal is opportunistic or if they occur in the run of play?

Zakuani: Every goal counts as one. From 30 yards out or on a header like Saturday night it is a goal and counts. Scoring is hard from two yards, or five or where ever. While it would be great to get a great shot, I'm not really worried with how I get goals, just that they get to the net.

DC: Has MLS been more physical than you initially expected?

Zakuani: Sure, its a strong game, but there are not a lot of bad tackles. Like with San Jose, it was physical, but fast play. Chivas was a little harder, but still the play was quick. It reminds me of England a little. Fast tempo, but a bit physical as well. Not bad, just physical and quick.

What are your thoughts on Zakuani's play in the last match? What about his comments today?