Sometimes luck is good and bad

Share All sharing options for: Sometimes luck is good and bad

I was tempted to write the Good, the Bad and the Ugly, but honestly that's a tired and worn-out blog title.

The Bad in this case was a lost wallet. I left it in the cab after I checked into the hotel. 24 hours later my phone stopped working as a phone. It still works as a music player, an internet device and a texting tool, just not as a phone.

24 hours after that the site went down.

The Good
In this case, was a Sounders win. An amazing VIP party where I couldn't recognize people because it was too dark counts as well. Talking soccer with a Norwich City fan who at one point sounded off with "Kat, he knows Darren Huckerby. He knows Norwich City." For some reason phrases like that always sound better with an accent.

Plus, we soccer fans are in a small club.

Fishbone gives a great live show. It is an interactive experience. They entered the crowd on several occasions, singing and dancing with the people who love them. I highly recommend them as a show. They include you in the experience and their music just makes you happy. A reggae/rap/ska/rock fusion band is always fun and Fishbone are amongst the earliest of the style.

Split Attraction played the Roxy even though they were probably in high school they rocked. A great mix of clean four piece sound that should be hitting the airwaves soon. So new as a band I couldn't find a website, but honestly, they have the sound and enough pull that they got in the Roxy during the Sunset Strip Music Festival.

Shiny Toy Guns was recommended by my wife, as well as my partner at work. They had some solid energy and a very different sound then most at the Festival. In fact they and Fishbone probably didn't fit except that they were from the area. This band is highly recommended. Their cover of Major Tom is both well-known and well-done.

Again, the list of bands I saw was long. Most of them played typical shortened festival style. They stood and they played. 30-45 minutes in most cases only Korn and Ozzy going longer. Overall, the SSMF is a must for any fan of SoCal rock.

Good was also getting my wallet back.

Ugly, I'm saving that for after the break. Not the guy in the middle. He was cool, a man who helped get me through high school and the Army. He didn't know it then, but he does now. 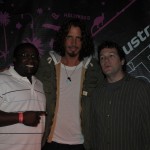 Lastly, yes the site is back