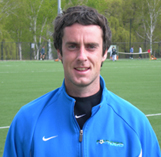 So I was noticing in the Seattle Times today (Wednesday) that the Sports section was running a Q&A with "Sounders FC Midfielder" Leighton O'Brien.

Anybody? He's not listed as an official member of the team on the official Sounder FC site. Not that this means anything -- Taylor Graham was listed as a player on the roster in Wikipedia months before anybody admitted it.

(Which just verifies my initial impression, which is that Wikipedia has supernatural powers.)

Not that I'm complaining. You have no idea how much I want more Sounders (pre-FC) on the roster.

It's just that I'm not seeing it anywhere but this little one-question filler in the Times.

Anybody want to clue us in on the Leighton status?