Seattle Loves Cornell Glen, OR: What the Weekend Games Did for Our Playoff Hopes

Share All sharing options for: Seattle Loves Cornell Glen, OR: What the Weekend Games Did for Our Playoff Hopes 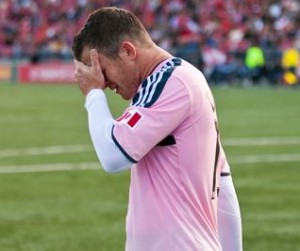 Okay, boys and girls, I think we should all reach into our wallets and send San Jose's Cornell Glen a fruit basket. Or a strip-o-gram. His choice.

(I was going to suggest sending him playoff tickets, but that would just be cruel.)

But the good news is that Glen and San Jose, while being out of the playoff picture themselves (again) have not stopped fighting. And for this we [heart] them in a big way. Cornell scored a 93rd minute equalizer against Toronto yesterday, denying TFC two much-need points.

(The photo shows TFC's Chad Barrett immediately afterwards. And yes, I do get a mild twinge in my maternal area when I post photos like this one. But that is overwhelmed by the great joy the rest of me feels knowing that our chances of making the playoffs have just been upped to 98.4%.)

What this means is that TFC is now sitting at 36 points instead of 38. We are at 41. And, since we own the all-important head-to-head tiebreak against Toronto, this means that for Toronto to pass us in the standings they would have to get the full six points in their remaining two games and we would have to get zero.

In other playoff news, Columbus are now our BFFs. They pulled out the 1-0 win over New England even after going down to ten men after a harsh red on Emmanuel Ekpo. I watched most of the second half and let me tell ya, it was tough to root for the bumblebees after last week. Although I must say, after twenty minutes I was thinking, "Wow. I've hardly seen any diving." Then I realized that Schelotto and Moreno weren't on the pitch. (Although their one goal was off a free kick. Didn't see the foul, so I'm not sayin', y'know? I'm just sayin'.)

And in the final game of the night -- a game whose first half was so butt-numbingly boring I just left the audio on my computer while doing other stuff -- Chivas have knocked KC out of the playoff race entirely. This is a good news/bad news situation for the Sounders. On the one hand, there is one less team capable of catching us. On the other, Chivas are now at 44 points with three games yet to play, which makes it that much harder to catch them and get a good playoff seed.

For the record, though, Zach Thornton seemed to pull something late in the game, so there is that. (By which I mean: I secretly love Zach Thornton. Don't tell anybody. But I wouldn't mind seeing him not on the pitch for the remainder of their games.)

Also, for the record, the GoSounders Deities of the Bullet Points came through for us with a win or draw on every weekend game except the least important one -- Chivas-KC. They even made Carlos Pavon miss his penalty against the US, ensuring that yes, we are going to World Cup 2010. (And this recovering Galaxy fan says: Yes, at last Pavon does something for us!)

For weekday games, though, I think our deities are something like 0 for 3. This makes me think that they have day jobs -- probably in Europe where the pay is better -- and are just moonlighting for Sounders FC.