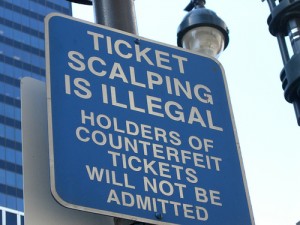 I'm pretty sure I was going to write something brilliant on soccer economics today, but I have a nasty cold and my brain is fuzzy, so instead I'm going to talk about a tangent that fascinates me: the post-purchase, grey-ish market for tickets and what this tells us about how much our tickets are worth.

First, for comparison purposes, journey back with me in time to the communist economy of the USSR, where wages and prices were all centrally planned. If the state said, "A loaf of bread will cost $X," then that was the cost. At least officially.

In practice, what this led to were long lines, shortages of goods and black markets, all due to the fact that when prices are artificially set below what they would be in a free market, there is huge incentive to sell outside the planned and regulated market at a higher price.

(Completely off topic -- because daytime Nyquil will do that to a blogger -- I was in the U Distruct during the Goodwill Games back in 1990 -- the first time Soviet athletes had ever been allowed to roam a capitalist country without handlers. I remember watching an athlete from the USSR -- identifiable by the CCCP on his jacket -- as he entered some average drugstore like Bartell's. The awestruck look on his face as he examined the floor-to-ceiling goods that weren't available in his country made me realize for the first time what it was that was really tearing the USSR apart.)

How does this relate to Sounders tickets?

As we talked about yesterday, Sounders tickets in 2009 have been priced below market, as evidenced by our gazillion consecutive sellouts. This means that there is pent-up demand in the market for our tickets, even at higher prices.

What got me thinking about this was when reader KFox over on the GoalSeattle boards mentioned that he sees the seats behind him listed on StubHub every week at a significant markup. This means that some enterprising person or organization apparently bought these tickets with no intention of attending the games; instead, the plan was to buy, then to sell at a profit.

This isn't a risk-free strategy, by the way. The person selling these tickets apparently made a bet last year, before the Sounders' situation was clear, that the team would be big and that demand would exceed supply -- not a small risk when you're talking about soccer in the US.

In the case of those tickets, the list price is $24, and the usual asking price is about $50. (Although it drops as the game approaches, since the chance of being stuck with unsold tickets increases.) Or approximately 100% markup.

This made me curious. And so, with the help of KFox (thanks much!) I did a little research on what, exactly, tickets are selling for on the resale market.

...if you go on Stubhub and tell them you want to sell. When you get to the place where you have to name your price they give you the last 20 transactions that have occurred for that game. Here are the numbers for the Dallas game:

See your section? See your tickets? What's the markup? 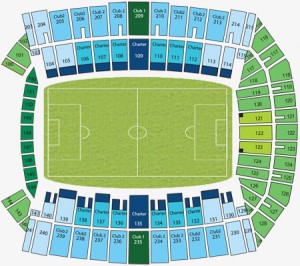 Of course, not all of that goes to the seller. According to the blogger's best friend, Wikipedia, StubHub takes a 25% commission, 10% from the buyer and 15% from the seller. Or, on those $97 tickets, the seller would end up with only $82.89. Still, though, a 237% markup, which is not shabby in this economy.

(What I find interesting is that the asking prices in StubHub for tickets near mine are frequently $100 or more higher than the completed sales, or a markup of 5-600% percent. I guess the take-home message here is, it's okay to get greedy, but not too greedy.)

The reason the markups are this high is, again, that supply is limited. Most of the ticket purchasers are people like you and me; we bought our tickets with the intention of actually attending the games. If too many of us had bought with the intent to resell, the market would be flooded and the prices we'd be able to ask (or at least to actually receive) would drop precipitously.

Or you can look at it this way: If enough people sold their tickets on the secondary markets, the equilibrium price the tickets eventually settled at would give us a pretty good idea of what the fair-market value of our tickets really is. Which, in my case, is almost certainly somewhere between the $35 I paid and the $97 to $109 the current repurchasers were willing to pay.

Question for anybody willing to answer: Have you ever tried to resell your tickets, either through a legit service like StubHub, or through Craigslist, or to a scalper? If so, how hard were they to sell, and how much markup were you finally able to get?