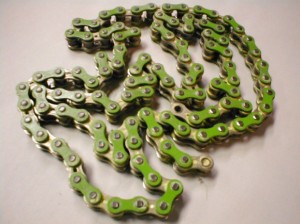 (What do you mean, what is the photo? It's obviously the Rave Green Links of a bicycle chain. You mean you don't have one?)

For the past two or three weeks I've been seeing great stuff from Seattle news sites and blogs and thinking, "Oh, that deserves a link." Today I'm finally getting around to it. Here are some posts that have made me smile. Or think. Or both.