Soccer Econ 101 (Part 3): Does Toronto Show Us What to Expect in Future Ticket Prices? (UPDATED)

Share All sharing options for: Soccer Econ 101 (Part 3): Does Toronto Show Us What to Expect in Future Ticket Prices? (UPDATED) 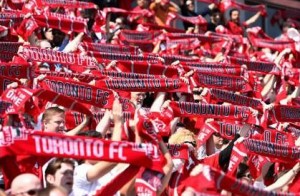 Somewhat disturbing comment on the Goal Seattle forums from "pugetpounder," who is also a Seahawks fan, about 2010's 30% price increase for everybody who is not a 2009 STH:

[The price increase is] not surprising to me at all...

Why is this disturbing? Because the Seahawks and the Sounders share... Well, if their marketing departments are not officially married, they're at least Friends With Benefits.

What this means is that, given the overwhelming succes of SSFC, we could be looking at similar price increases over the next few years, given that in both instances the original goal was to fill seats. Now the Sounders may be following the Seahawks with the goal of maximizing revenue.

Admittedly, we probably won't be facing increases on quite the same scale, given that soccer is nowhere near American football in popularity. But the increases could definitely be enough to make a lot of current fans think twice before renewing.

So what will it mean to be a current SSFC season ticket holder, at least after the 2011 season? (Remember here that current prices are unquestionably below market, and that prices are set for 2010 and 2011. But after that all bets are off.)

Probably the closest thing to SSFC would be Toronto FC, the other shockingly popular team that's sold out every game. How have they used ticket prices to handle the fact that their ticket demand exceeds their supply?

For the answer, I went to Duane Rollins, blogger at the fun Canadian blog The 24th Minute. (And thanks also to Toronto Offside's Mark for looking into it as well.)

Duane's a TFC season ticket holder from the first -- and in the cheapest supporters' section -- so he knows firsthand what the price increases have looked like.

Duane did say that the price increases have not necessarily been across the board. Last year the more expensive seats got a higher percentage increase, while this year it seems to have fallen on the cheaper seats in the supporters' sections.

What does this mean for SSFC fans?

I'm not sure. The one real wild card in this is the fact that SSFC has Qwest, so unlike TFC they have the capacity to expand the ticket supply substantially, and to keep prices down if they choose to. There would be tradeoffs to this, including the possibility of not having sellouts -- which the team now prides itself on -- and the added expenses of opening up things like concessions and security in the upper deck.

Will they decide this makes sense for the team? I have no idea. But I'd suggest starting to save up now for 2012. Just in case.

UPDATE: Got more info on TFC ticket prices from our Mark, our Toronto blogger. I think these are Canadian dollars.

For comparison purposes, here are season ticket prices for this year as compiled by "foreleft" on the Goal Seattle forums.