The Utterly Unofficial Awards from KC-Seattle

Share All sharing options for: The Utterly Unofficial Awards from KC-Seattle 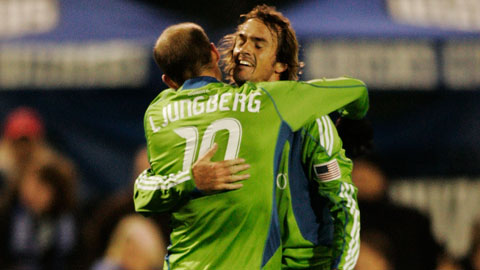 The, "ACTUALLY, THE GRASS IS GREENER ON THIS SIDE" award to:
Seattle Sounders for making the playoffs with a game to spare.

Did anybody else read headlines this morning like, "Chicago fail to clinch" and think: "Haha! For once they're not writing about us!" Cruel, yes. But dammit, we deserve to gloat a bit!

Or: Whew. I can scratch that one off my superstition list.

The "WHOSE BRILLIANT IDEA WAS IT TO HAVE THE BOYS PRACTICE THE CROSSBAR CHALLENGE?" award to:
Steve Zakuani and Nate Jaqua and whichever member of the training staff had the brilliant idea to have the boys do the Crossbar Challenge.

Guys, you do remember that the goal during games is to get the ball inside the net. Right?

(Although I suppose Nate should get at least a partial pass here for getting it right when it really counted.)

The "WAIT, WHAT? THIS GAME LETS YOU SCORE GOALs WITH YOUR HEAD?!?" award to:
Roger Levesque.

Atta boy, Roger! You show the big boys how it's done!

The "SO YOU HAD A BAD DAY" Award to:
Fredy Montero. Needs no explanation.

It's okay, sweetie. It happens. Shake it off. I would recommend clicking on the link and listening to Alvin and the Chipmunks sing the song about half a dozen times. Then you'll be ready to come back and lead us past Dallas and through the playoffs.

The "YOU GOT THAT RIGHT" award to:
Kevin Souter (? the Scottish guy who did the KC broadcast on MLSnet) for the following quote after Marshall's goal:

"I don't know they can do that. [i.e. sit back and defend a lead.] They're a team that's designed to attack."

No kidding, Kevin. Although I'm afraid I must again give out the...

"THE FIELD HAS TWO ENDS, REDUX" award to:
The post-Jaqua-goal Seattle Sounders for allowing way too much play in their own half in the last fifteen minutes.

Gentlemen? You know when I gave you this award last time? That was called sarcasm. I did not mean to give the impression that this award was something to aim for in future matches.

The, "YOU'RE NOT REALLY ANGLING FOR A EUROPEAN LOAN DEAL, ARE YOU?" award to:
Freddie Ljungberg. Because three assists in one match kind of makes it look like you are.

The "WAY TO MAN UP" award to:
Kasey Keller for confessing in the post-game press conference that he called the defense off the ball on the first goal because he though it was going wide.

Leo Gonzalez's credibility thanks you, Kasey.

The "KIND OF LIKE YOUR GRANDMOTHER'S GIRDLE" award to:
Community America Ballpark and its tiny, tiny pitch.

It's tight, it's confining, and breathing soon becomes optional. But ultimately you kind of get comfortable with it.

And finally, on a personal note, the "THANK YOU FROM THE BOTTOM OF MY HEART" award to:
The 2009 Seattle Sounders.

I've mentioned this before, both here and elsewhere, but when your family is facing tough stuff it's kind of nice to have something as normal as a soccer game to look forward to every week. So...thanks, guys, for giving your fans a great inaugural season.