Share All sharing options for: Columbus, Here We Come 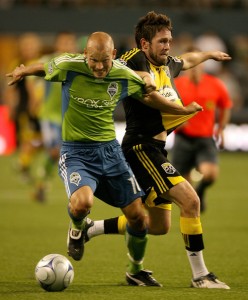 I don't think I'm the only one having trouble working up the energy for a preview here. All over the blogosphere and forum-osphere, everybody is just kind of hanging out and waiting for the game to arrive. It's like we've spent so much energy working ourselves up over prior games that there's nothing left.

A win and we'll move forward significantly in our playoff bid. A draw and we'll limp up a bit. A loss and...

Let's not think about that.

Columbus has a league-leading 46 points, and they have a game in hand over most of the rest of us. We are the underdogs, they are the...um...overdogs. It's Sigi's first return to the home of his MLS Cup victory. Nate Jaqua is suspended for us. Frankie Hejduk is suspended for them.

From our last meet-up, I remember two things: 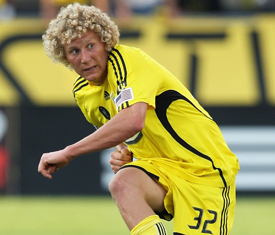 1) how much I hated Ekpo for his time-wasting, and
2) Tyrone Marshall's stupid red card for smacking Shirley Temple Steve Lenhart (pictured).

And remembering this, I am loving Tyrone Marshall all the more. Just for the record.

I don't know what else to say about this game.

We need the win. The end.