Want to See How the MFP (Most Favorite Player) Poll is Coming?

Share All sharing options for: Want to See How the MFP (Most Favorite Player) Poll is Coming? 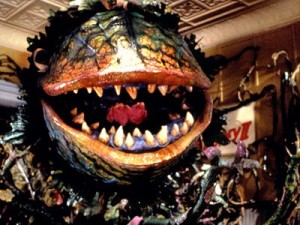 Remember my MFP (Most Favorite Player) poll? It started out kind of like a nice, itty bitty little plant. I took the seed, put it in the ground, gave it a little water, provided a little fertilizer....er...links... And then I forgot about it.

Then I stopped back by today and...AAAAAAAAAAAGH! It's alive! It's growing! It's like Little Shop of Horrors! It's taken on a life of its own! One-thousand-one-hundred-nineteen votes so far, and it's still going.

It's become a battle of the Brad Evans fans vs. the Roger Levesque fans. Brad is currently winning.

(Wait. Did I just mix my horror movie anti-heroes?)

If I cared about you people, I'd close the poll and give you voters your lives back. But I guess I don't, because I'm going to let this keep going. (Although you should be grateful. if I were feeling really sadistic, I'll close this poll and start another one. And then the Brad and Roger fans would have to start the battle all over again.)

So Brad fans? Roger fans? Fans of everybody else? Check out the results (below the jump), and then feel free to keep voting. Final award will come after whichever game becomes our final. (Which, with luck, will be November 22.) Although I do reserve the right to create something similar but with a limit of one slate per person. If I feel like it.

Again, vote for up to four at a time, as many times as you want.