Share All sharing options for: My Utterly Unofficial Awards for the Western Conference Semifinal, First Leg 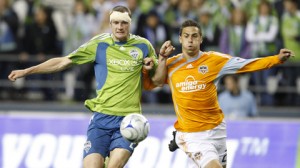 With 50% of the spots awarded to wild cards, let's just abandon this conference charade once and for all. The rest of the universe says you're the "Cup quarterfinals." Deal with it.

Ricardo? I can sort of understand that -- after the Beckham red card, and the diving yellow to Moreno, and your ignoring of Divotgate, and the fact that Seattle was 3-0-1 with you on the field -- you might kind of feel a need to balance the scales a bit. But you were asleep at the switch last night and risked completely losing control of the game. I hereby take back every nice thing I thought about you in my insomniac ravings.

And Alex Prus is my favorite referee. So there.

Okay, guys. (Stevie Z? Fredy? Freddie? I'm especially lookin' at you.) You've had this game to work out the kinks and get over the playoff jitters and to recognize that Houston are no pushovers. And to remember that you're supposed to pass to the guys in green. (Or blue, as the case may be.) Now let's see the team we've come to know and love in Houston next weekend.

(Freddie and Fredy? Do we need to send you on another camping trip?)