Tyrone Marshall and the Evil Divot

Share All sharing options for: Tyrone Marshall and the Evil Divot 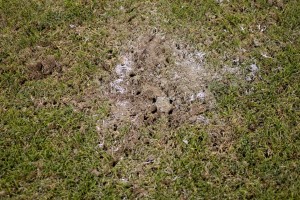 (I think the title of the post should be sent directly to J.K. Rowling. But I want royalties.)

Swiped this photo from the official Crew blog, The Black and Gold. The caption reads, "There used to be a white spot here." There's another on their site that provides a little depth perception. (Black and Gold folks, if you're offended by my thievery, let me know and I'll take it down. Wouldn't want to steal more than the three points from you in one week.)

So, did anybody else wonder exactly what was up with Tyrone Marshall and Guillermo Barros Schelotto yesterday before the penalty?

The Crew have this explanation:

After referee Ricardo Salazar whistled Jhon Kennedy Hurtado for bodyblocking Eddie Gaven in the box, Hurtado and James Riley undertook a lengthy appeal. Hurtado and Riley remained in Salazar’s face for nearly a minute, keeping the referee occupied. It was the perfect diversion for Sounders defender Tyrone Marshall, who went to the penalty spot and got to work with his cleats. Marshall earnestly dug into the spot as if he were a slugger prepping for a crucial at-bat. He raked his cleats and back and forth, back and forth, over and over again. He jammed his heel into the ground when more force was needed. By the time he was finished, there was barely any evidence left of the white dot. There was a crater in its place.

It was a classic "pulling one over while the ref is distracted" move straight out of the scripted world of professional wrestling. Or like when a bank robber calls in a bomb threat across town to divert police attention before hitting up the bank.

To the Crew's and Schelotto's credit, they're not blaming the loss on this action. Schelotto says,

“It’s my fault, I know,” he said. “I feel terrible for the missed penalty. I shoot bad and put the ball outside. They broke the floor before the penalty, but it is my fault.”

And Sirk at the Crew blog is pragmatic, saying:

People’s opinions can run the gamut from “blatant cheating” to “brilliant gamesmanship”, and either way, I am in the “shrug it off” camp. Nine times out of ten, Seattle’s actions wouldn’t have mattered anyway. The one-in-ten miss makes it all seem more important than it probably was.

What do you think about this?

I'm of two minds. On the one hand, I'm uncomfortable with anything that's not 100% above-board. (Although I'd like to see a "before" picture before making up my mind.)

Don't tell my mother, but there is a dark and subversive side of me that is secretly thrilled by the sheer, brazen ballsiness of the act.

P.S. If anybody makes an "I ♥ Tyrone" T-shirt with a picture of a divot on it? I want the first one.