Confession Time: What Superstitious Things Are You Doing During our Playoff Run?

Share All sharing options for: Confession Time: What Superstitious Things Are You Doing During our Playoff Run? 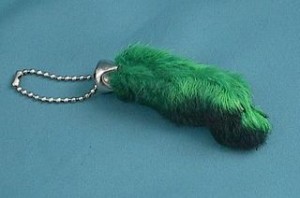 You know what I find kind of disturbing? How closely I'm following the Bullet Point "Team A to beat Team B" posts over at GoSounders.com. (You know. As described here. Most recent Bullets here.)

As I said earlier, Mike goes to a sports stat site, pulls their data about what will be best for Sounders, and posts it online in bullet point form. The first week he had 100% success, with one exception: NE vs. Seattle, which was listed separately. This week, though? The Seattle game was in the form of a bullet point and we won.

Coincidence? I think not.

What I'm finding kind of troubling is how much I -- a grown woman with a Master's degree -- am buying into this. Seriously, my imaginary Deities of the Bullet Points have become oddly real to me, even with this week's less-than-100% accuracy. (Because they're still doing better than the 50% you would expect from random chance.)

Other superstitions: As I said before, I couldn't watch the most recent LA or Columbus games and we won. I watched NE and we lost. No connection, right? And yet there's no way I'm going to be watching KC as it's happening. Oh, and I wore my bootleg Seattle-Barca T-shirt on Saturday. Pretty sure that's what put them over the top, so I'll be wearing it again.

Is it just me? Tell me it's not just me. Make me feel better by confessing your deepest, darkest superstitions.

Or, to put it in a more positive light, what are you doing to get the Sounders into the playoffs?