Share All sharing options for: Leo Gonzalez scheduled to start for Costa Rica 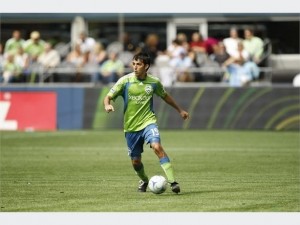 Costa Rica has apparently been paying attention to the Seattle Sounders' form, because Leo Gonzalez is listed as scheduled to start for Los Ticos tomorrow against Trinidad and Tobago, and then probably again vs. the US in DC next week.

The links I have are in Spanish, but the magic of Google Translate give us:

Simoes in training yesterday morning stopped an eleven Keylor Navas stellar in goal, while in the background were: Luis Marín as libero and Dennis Marshall and Cristian Montero as stoppers, together in bands with Leonardo Gonzalez and Pablo Herrera left by right.

Which my buddy Herschel over at the KC blog swears says that Leo is starting.

Or we have this source, which spells it out more clearly:

In the right wing Pablo Herrera and left Leonardo Gonzalez.

Our new-but-loved Leo proudly representing his country, yet at the same time risking injury for another team and then playing against our beloved USMNT?

I believe this would be the definition of mixed emotions.

P.S. Was anybody else kind of secretly thrilled to see Leo finally learning to channel his inner thug against Robbie Rogers and Co. in Columbus? Or was it just me?