MLS Cup: RSL and LA Battle for Our Love. Who Wins Out?

Share All sharing options for: MLS Cup: RSL and LA Battle for Our Love. Who Wins Out?

MLS Cup! Tomorrow! In our city! Are you excited?

I am, believe it or not. More than I expected to be. Because it's not like the Sounders themselves can ever manage to get not one but two articles on the front page of the Seattle Times.

(Sounders are lucky to even make the front page of the Sports section.)

And on the "this is entertaining" front: The Times reported yesterday that The Powers have had a hard time finishing the MLS Cup painting on the Space Needle because of...wait for it...

Yes. Rain. In November. Who could possibly have predicted that?

Also, my buddies over at GoSounders have a link up to buy MLS Cup gear. If you're interested in buying, think about buying through them.

(Warning: It's all gray. I guess they decided that color this time of year would be a shock to our systems that we might not be able to handle.)

First the LA thing, as swiped from Seattle Soccer Examiner, which has a post up on the topic: 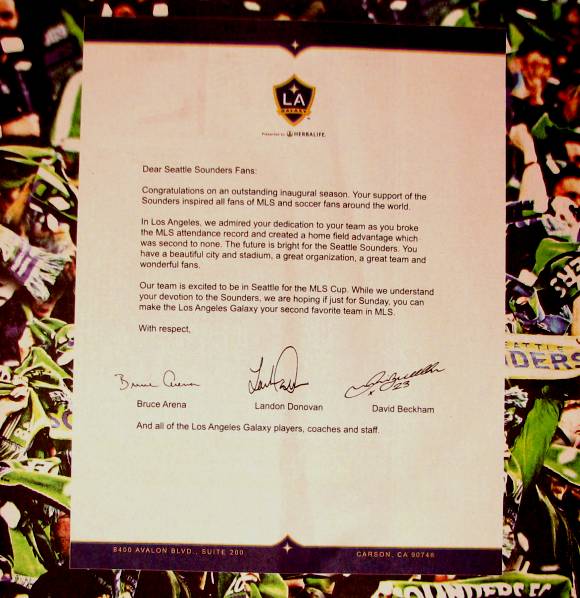 And second, the interviews with the RSL guys.

SEATTLE (Reuters) - David Beckham and the L.A Galaxy are hogging the attention for Sunday's MLS Cup final but opponents Real Salt Lake expect to benefit from a backlash from supporters in Seattle.

The majority of the expected 40,000 fans at the neutral venue will be supporters of local team Seattle Sounders and are unlikely to support the Galaxy against underdogs Salt Lake.

"I don't think the Sounders (fans) like them at all, I think they are going to be on our side," Salt Lake midfielder Andy Williams said.

Captain Kyle Beckerman shared that hope and expected a passionate atmosphere in a stadium that has hosted the biggest crowds in the league this season.

"It was amazing the time we came and played the Sounders," Beckerman said. "It has been great to watch any game they have had on television.

"The fans really support their team well here. It has a real European atmosphere (and) I'm hoping it will be something like that on Sunday. Hopefully all the Sounders fans will get on our side for the game."

Are you swayed, Sounders fans? Who will you be rooting for?