Or: Why James Riley Was Left Unprotected

You'll probably need some understanding of the formation aspect of soccer strategy before reading. Wikipedia is a good resource, and if you've watched many Sounders games you'll have picked up quite a lot of information as well. Sorry in advance for the English spelling.

Four at the back, one or two at the front. While there exist a huge variety of midfield combinations a Major League Soccer team can run with, the formations are typically bracketed by these five or six players. I imagine at this point several of you are already readying the comments that say I've completely ignored 3-5-2, which indeed I have. Before getting to the heart of the post, let me explain why.

3-5-2 is a formation which takes the two wide defenders in a four-man back line (the full-backs) and pushes them into midfield, which reinforcing the defence with an additional central defender (centre-back). This has the effect of providing an additional defender to cover the two central strikers in the standard 4-4-2 whilst simultaneously overloading the midfield, allowing advantages in two key areas of the field. The formation came about as a direct response to 4-4-2 pulling the old-style wingers down the field and slightly inside. Why ignore a system designed to combat the most common formation on the planet, then? The answer is simple. Modern teams are perfectly capable of making changes to their shape, and within the 3-5-2 lie the seeds of its own demise. Withdrawing one forward from 4-4-2 into the central midfield turns the formation into a 4-5-1, leaving one of 3-5-2's central defenders standing around essentially doing nothing, almost turning the game into 11 vs. 10. So while we accept the possibility of a 3-5-2 appearing, its shortcomings mean that we don't expect it to encounter it too often. This is a formation whose heyday seems to have already passed, although we may see a form of it arise with one centre-back and two wing-backs, which would be functionally completely different (and defensively suicidal, one would only see this against teams playing something like 4-6-0, which nobody does. Yet).

Why Not Three Up Front?

4-3-3 is a formation you'll also see talked about which seems to turn my first sentence on its head (perhaps I should have written a more accurate first sentence!), but in most cases the attackers are staggered in a way which means that the two side players of the three in the front are only slightly advanced from the outside midfielders in 4-4-2, with a centre forward withdrawn in favour of a play-making central midfielder. It's rare that the outside forwards lie so far upfield that they could be considered bona-fide strikers, and there are no three players in MLS capable of providing the service that such a formation requires. Spain can pull it off fairly effectively against weaker teams, but they can field Fabregas, Iniesta, and Xavi, which might be the best set of midfielders who've ever lived, and it's still not that useful against their elite opponents.  So let's also neglect the possibility of seeing three 'real' strikers running rampant.

I hope at this point I've convinced you of the merits of my first sentence. If not, feel free to ignore the rest of the post!

Defenders are not all cut from the same cloth, mainly because there are normally only one or two true forwards to deal with. Centre-backs are typically tall and strong in order to deal with the aerial threat posed by opposing centre-forwards. Extremely good pace is a plus but not an explicit requirement, and good distribution is also overlooked in favour of hoofing the ball out of dangerous areas of the field as hard and fast as humanly possible. So although a centre-back has to be a good player in his own right, they tend to be stronger than fast, good in the air, and uncompromising in tackles and clearances.

Full-backs (when they are deployed a little further upfield they become wing-backs, but for our purposes the two designations are interchangeable) are a different story. Their main opponents are not the central strikers of the world. Rather than forwards, they deal with the outside midfielders, whose main goal in life tends to be cutting inside and shooting or cutting outside and crossing to the strikers. These players - I'm going to refer to them as wingers, but this isn't technically true as wingers are the outside forwards in 4-2-4 - need to be fast, clever, and have good deliveries. Defending against them requires different skills. Aerial prowess isn't as critical as it is in the centre-backs, although it's useful for defending crosses coming in from the opposite flank. Decent speed suddenly becomes vital as wingers are very often the fastest players on the pitch. Clearing the ball may not be as important as sensibly distributing it to one's midfielders.

Most of all, though, the difference between the outside and inside defenders lies in their attacking responsibilities.

Centre-backs are utlised as attacking options fairly frequently, but this generally is due to their heading ability being useful in set-pieces such as corners. Other than very specific situations, we do not expect to see the central defenders in the opposing half. Full-backs, on the other hand, have become very attacking in recent years. Why?

Imagine 4-4-2 vs. 4-4-2. Who are the only players with space directly in front of them, with no immediate opponent? The full-backs. If you are having trouble, the picture below might help. 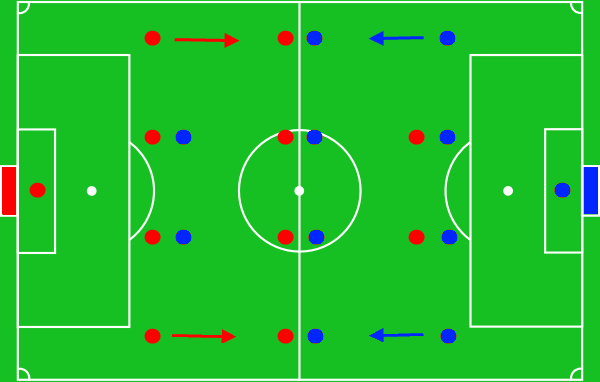 Figure 1: 4-4-2 vs. 4-4-2. The outside defenders are the only players with unoccupied space immediately in front of them.

In the past fifteen years, the full-back position has possibly undergone the most drastic tactical shift in the sport. Full-back is no longer a static position, waiting for wingers to make their move and counteracting their attacks. Modern full-backs are expected to fully contribute to the attack, providing overlapping runs when a winger cuts inside and opens space at the touchline and crossing when in advanced positions. While it's rare to see these players with a knack for goal, they are so common in the immediate build up to goals that it's totally unremarkable that they record assists. Many have said that the wing-back is the most important position in attack, and I'm not particularly inclined to disagree with them. Having a wing-back who cannot go forward is the equivalent of shooting yourself in the foot.

But James Riley is a good attacking player, and I promised that I'd try to shed some light on why he was left unprotected. So what gives?

On One Dimensional Full-Backs

Although I question that Riley really deserves 'good' attached to his attacking performances, that's a subject that will have to be revisited once I get my teeth into more advanced metrics. My belief (unvalidated as of yet) is that he gives the ball away far too often in midfield, which leads to dangerous fast counterattacks by the opposing team, but many intelligent observers think he's more than adequate as an offensive threat, so I'll leave it at that for the time being and instead focus on defensive frailties, which is something more or less everyone has noticed about his game.

Simply put, James Riley is an attacking player playing defence. He's more or less totally incapable of shutting down wing play on his side, and has his central defenders and goalkeeper to thank for covering up his mistakes. Riley does not close players down - not because he doesn't know that pressuring the opposition is a good idea, but because he's not really very good at tackling, and letting a winger run straight by you is probably a worse plan than keeping them in front of you. I don't think anyone will argue that Riley's strength lies in going forward, while his defensive play is a weakness, and by leaving him off the protected list, the Sounders seem to agree with me.

In the previous sections, I have described why a full-back who cannot attack is a liability in soccer, which seems to explain the absence of Zach Scott far better than it answers any questions about Riley. The key here lies in how teams counter good attacking full-backs, which is something Fabio Capello demonstrated in Zagreb last year. Jonathan Wilson, whose wonderful book Inverting the Pyramid is the source of much of my knowledge on formations and tactics, explains it far better than I could:

England's 4-1 victory in Croatia... can be seen as a tale of winger and full-back. [Left-back] Danijel Pranjic had looked excellent in the [2008 European Championship], his overlapping runs allowing Ivan Rakitic to drift infield off the left flank on to his favoured right foot. Faced with the pace of Theo Walcott, though, he never had the confidence to abandon his man and surge forward, which had the effect both of stymieing Croatia as an attacking force, and of exposing his own defensive shortcomings. That Walcott scored a hat-trick underlined the point, but came almost a bonus alongside his primary role of disrupting Croatia's left flank. [Article]

As an attacking threat, Riley is completely neutered by a good left winger. He then becomes a pure defender, forced backwards by both the skill of his opposition and his own defensive ineptitude. Without the requisite defensive talents, he is essentially unable to break out of his own territory, because he's forced to sit much tighter on his direct opponent. And not even that works very well, due to his habit of dropping away whenever they get the ball. So while a non-attacking full-back is a liability against any team, a good team can push Riley completely out of the game simply by calling his defensive game into question more often.

One imagines the Sounders know this, and that they are prepared to lose him to the Union in the draft. A more well-rounded player at right-back would improve the team (and I'm not touching the disciplinary issues here either). At the end of the day, James Riley is a shiny piece who can be a critical part of the Sounder attack on good days. But on bad days, his liabilities collapse the team's attacking outlet from the right side. And playoff games? They're probably going to be bad days for Riley. I wouldn't be too concerned if he ends up in Philadelphia.