The Post Where We Let Ourselves Grieve Over Losing Séba

If you're stopping by here to say that things could have been worse in the expansion draft, and that Sébastien Le Toux's salary wasn't justified by his production, and that it won't be that hard to replace him?

Come back tomorrow for another topic. This is not the post for you.

This is the post where we just get to feel sad, and to grieve over the fact that Le Toux's days in Rave Green are over.

Because the thing about Séba? He was far more than just numbers. He was greater than a tally of his goals.

One of two players (the other being Roger Levesque) that I did NOT want Philly to take.

Take a look again at this photo, taken by Rod Mar. 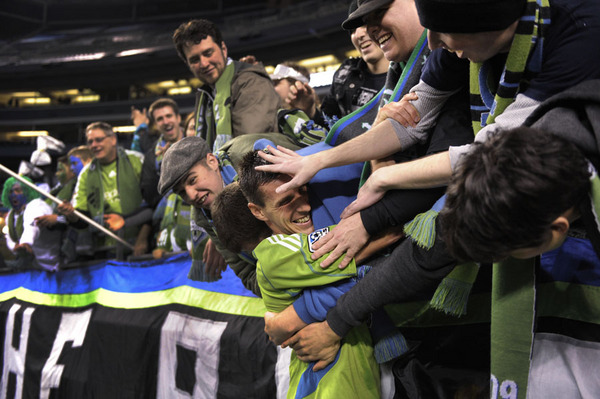 This is what I originally said about it, back in March:

I spotted this picture over at Rod Mar’s photo site and just couldn’t look away. In case you can’t see the player buried in the hugs, that’s former USL guy Sébastien Le Toux.

It captures so much of our city’s transition, doesn’t it?

We’re a Major League city now. We have the bigtime professional athletes. But I’m thinking there’s a bit of regret at having to give up what Seattle had — the smallness and the intimacy of USL.

This photo, for me, perfectly captures soccer in transition in Seattle — the move from USL to MLS, the previous closeness of the fans to the athletes, the desire for that not to disappear.

Looking at the photos of the other athletes, post-game, made me think that yes, the other MLS athletes are admired by the fans. But Sébastien, our USL guy, belongs to the fans. Still.

Not sure what feels worse. That he no longer belongs to us, the fans, or that he now belongs to the fans of another team.