Too Many Nominees. We Need a Plan. Vote for Marshall and Ianni. Or Kasey and Fredy. Or...Damn. I Hate Decisions

Share All sharing options for: Too Many Nominees. We Need a Plan. Vote for Marshall and Ianni. Or Kasey and Fredy. Or...Damn. I Hate Decisions 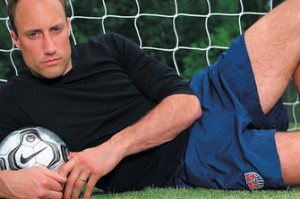 (Oh. Wait. Excuse me. "AT&T Goal of the Year" and"Degree Men Save of the Year." Because I'm pretty sure that none of this would have been possible with the wrong antiperspirant and long-distance plan.)

At any rate, we have a bunch of candidates for both. Almost too many.

The issue here is that Seattle has eight candidates for Goal of the Year -- fully 20% of the total -- and four for Save of the Year (10%.) What this means is that if we don't focus our attentions, we risk having our votes cancel each other out. If this happens, we'd see any voting advantage we get from our huge fan numbers erased. Or eclipsed by Dallas spambots, who, if they could, would cheerfully award "Top Serial Killer AND World's Best Dad" to Jeff Cunningham and/or Dario Sala.

(Irrelevant aside: Is anybody else surprised to see this kind of thing coming from Dallas? Not that I consider the city too ethical; just that I never thought they were smart enough.)

But anyhoo. To keep this from happening, we need a strategy. We need to pick a goal (or two) and a save (or two) and focus on those. My recommendations below:

Below are our Goal of the Year candidates, as swiped from GoSounders. (Because I'm way too damn lazy to type this stuff up myself on a UEFA Champions League day.)

I'd recommend that the Seattle community focus on one of these two: That Ianni bicycle kick goal against Houston (because it's easier to win Goal-of-the-Whatever with a bicycle kick) or Montero's amazing blast against New England. (Which is up for the award despite the fact that Dallas spambots swiped the goal-of-the-week award that week.) Those two will be where I'm focusing my energies.

Must say that for the sake of sentiimentality, though, I'll probably vote a couple of times for Montero's and Seattle's very first goal against the Red Bulls way back in March. But after that I won't let myself get distracted.

Montero is currently fourth with 8%, and Ianni is way down the list with 3%. This means you need to vote.

For Save of the Year, I'm also swiping from GoSounders. (So please click on the link when you're done here to keep them from hating me too much.)

Kasey Keller has 3 saves up for MLS’s Save of the Year.

Week 3 vs. Toronto FC makes a diving save to the near post
Week 10 vs. Colorado stopping a Conor Casey doorstep header
Week 21 vs. Real Salt Lake where he shuts down Robbie Findlay

Tyrone (week 29) is currently leading with 14%. I'd recommend sticking with this one. But if you're feeling bad about not voting for Kasey, how about that Week 10 save, which is currently the top Keller save with 3%.

(Also, please note that our all-time favorite goalkeepers, Josh Wicks, Pat Onstad and Dario Sala are up for the saves. Can you live with yourself if the award goes to one of them? I thought not. Go vote.)

Save of the Year here.

Goal of the Year here.

What do you think? Agree with my choices? Or is there a particular goal/save you prefer?