Share All sharing options for: Referees, Sacrilege, Foulfests and Other Rave Green Thoughts that Kept Me Awake Last Night 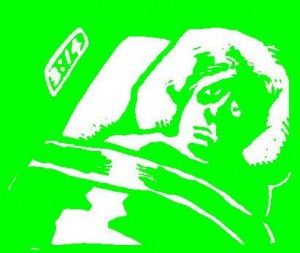 Once again, those rave green thoughts that kept me awake:

Jorge Gonzalez. That's the referee. Has he reffed for us before? Can't remember anything about him. Without more information, I might as well assume he's good, right? Why not? I mean, why not even assume he's really, really good? As in, "This is the kind of perfection that would occur if Alex Prus and God had a love child."

Am I going to hell for having that thought? Or worse, will the Sounders lose because of it? That would be really bad. I hope I didn't just condemn them to loss-by-lightning-bolt.

Dear God, if you're offended, feel free to take it out on me but please do NOT punish the Sounders. As they say on Fox News, the "blogger's opinions do not necessarily reflect the thoughts of the organization."

Plus we all know you'd never cheat on Mary.

Wait. Did I just compare myself to Fox News?

Hope Gonzalez controls the game, though. Otherwise it's gonna get nasty. Or at least I THINK I hope he controls the game. It could be kind of unfair if Houston was able to get away with that foulfest last time, but now that Seattle has figured things out they start throwing around cards. Or it would be unfair if they started throwing around cards at US. At Houston would be okay.

Wonder if Marshall's knee is better. I hope it is. Or at least I THINK I hope it is. Ianni was so close to scoring last week. Be nice to see one go in this time. And against his former team, too. But Marshall is so good at...um...let's see, what euphemism should I use...? Enforcing. Marshall is so good at ENFORCING. Basically, what I'm thinking is, Enforce away, Tyrone, but do it OUTSIDE of the visual range of the refs, okay? That's a good boy.

It would be kind of fun to see a little enforcing against Onstad. And to see Fredy get under his skin again. I didn't think Pat was capable of losing it like that. Also, did I just see a picture that made it look like Onstad was growing back his beard? He looked really good with that beard.

Wait. I shouldn't think that. That's a traitorous thought. Kind of like telling Benedict Arnold you like the powder job on his wig. Or admiring Ethel Rosenberg's shoes.

I didn't mean it, Pat. Seriously? That beard looked like crap.

Should be a great game though. I can't believe Houston's only sold 20,000 tickets.