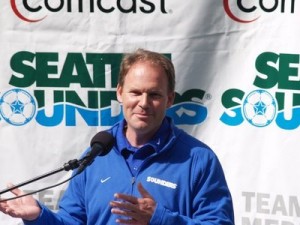 I got an email today from Rocky Cole, who writes our RSL blog and who's also a staff writer at Soccer Hype. He has a great interview up with our current Assistant Coach and former USL coach Brian Schmetzer. Some really fun, off-the-beaten-path stuff, like this:

RC: [...] Sigi is known throughout the U.S., and actually the world, as one of the best coaches the U.S. has ever produced. What has been your experience working as his top assistant coach?

BS: It's been great. I've had a couple of mentors, Jimmy Gabriel, one of the early Sounder coaches, has been one of my mentors, but Sigi certainly has taught me a couple of things to help me along as a young coach.

Number one, right from the git-go, Sigi told me, 'Look, I need you to tell me how you feel. I need to be challenged by my assistant coaches and by the staff, because if I'm not, I'll get complacent.' He gave me the complete go-ahead to say, 'I agree with this, but I don't agree with that.' That was refreshing, to know I was able to express how I felt.

RC: In most MLS cities, players and coaches can walk around and not get noticed that much. I hear it is different in Seattle for the Sounders staff and players, more like being an NFL or NBA player. Is that true?

BS:I was sitting at dinner with my son Kian at a restaurant in the University District, and two guys came up asking, "Are you Brian Schmetzer?" and they went on and on about, "We love the Sounders..." They were very excited about the team and what we were doing.

When they left my son, Kian, was like, "Oh my god, dad, I had no idea that people were so crazy about the Sounders." [Translated as - I finally impressed my teenage son.]

It just makes you feel good that people are so into the team. Some of us older guys that have been around awhile know that you just can't take this for granted, because there might be some lean years.

To me, Rocky said:

Brian was very open and had more to say when we talked. He really is not taking the success of the team for granted and he is truly appreciative of the fans. He had a lot more to say about the brilliant way the management team for the Sounders (Vulcan) set them up for success. He is very loyal to Adrian Hanauer, too. That was apparent.

My personal feeling is that Brian will be there for the rest of his career and has a very good shot of taking the helm if Sigi retires. That said, Brian told me he is perfectly content to stay in the #2 spot.

(That's the NASL-era Brian, btw, over there on the right.)

Stop by. Read the interview. Trust me, you'll enjoy.

One thing, though. Rocky? Didn't you tell me that if we supported RSL, you'd shave Kyle Beckerman's head?

We did our part. Now it's your turn.