The Post in Which I Appoint Myself the Unofficial SSFC Team Mom. Just in Time for the Holidays

Share All sharing options for: The Post in Which I Appoint Myself the Unofficial SSFC Team Mom. Just in Time for the Holidays 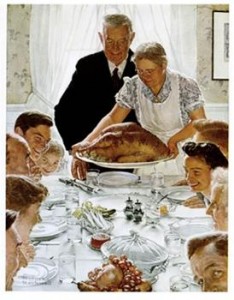 In case you hadn't noticed, it is currently the butt-numbingly deadly-dull off-season, where there is nothing to write about. It is also the time of year when our thoughts turn to family. And celebrations. And family celebrations.

You know. Those rare-yet-wonderful bonding experiences, where you get to reconnect with relatives you haven't seen in awhile, and where, if you're like me, you have yet to stab anybody. (And have no plans to stab anybody. Ever. At all. Or anything.)

And to further those plans, I've been reflecting on the fact that a bigger family is a really good thing.

In other words, an extra twenty-four or so would be perfect. Which means that I've been considering applying for the position of SSFC Unofficial Team Mom.

What's great about this is that I don't think the position is filled. And if it is, I must say that I have great faith in my own ability to be even more unofficial than anyone else.

Of course, I'm not actually sure what the job of Unofficial Team Mom would entail. But I think that somewhere in the job description are
1) being nurturing at all times,
2) providing orange slices at halftime, and
3) never (meaning not ever) writing about players' groins. (And as an addendum to #3, it would probably be best that you never have "[player name + groin]" turn up in a google search even remotely related to you.)

I believe I am up to this challenge.

For example, I am really good at #1. You want nurturing? I nurture. Win, lose, draw, my nurturing self will be right there, in the way that only a mom who has watched her son's mostly pretty average team get promoted to Rec Division 1 only to see their two star players poached by another team can be. Nobody can say, "Oh, sweetie, it's okay. Wins are totally overrated," with the same kind of nurturing I can. Which I have to think would be kind of nice at a time when everybody else in the universe would be saying, "Wow. You guys really sucked."

(Not that this would ever apply to Sounders, of course.)

And despite my complete lack of a domesticity gene, I'm pretty sure I could handle #2. I'll even cut the oranges just the right way, so that the guys can shove them in their mouths and suck out the juice and then make big, goofy orange grins. Which I believe is what the combination of guys + oranges was created for. (Taylor and Roger, I'm pretty sure I'm lookin' at you.)

And even when it comes to #3, which is by far the biggest challenge, I'm almost totally positive that I qualify. Or at least that any particular [player + groin] combination would not show up until at least page four or five of any google search. At the earliest.

And to put this to the test -- a test I am quite confident of passing -- I head to google and...

Okay, can we go for two out of three?

(Oh, what? It is absolutely not my fault that the phrase "groin injury" is inherently funny to anyone not suffering from one.)

But moving on. Whaddya say, guys? Can I be the Unofficial Team Mom?

Was that a yes?

I'm pretty sure I heard a yes. Or saw a nodded head. Or witnessed Adrian Hanauer sending me secret "You are our mother" hand gestures during the last March to the Match. Which is more than good enough for me.

And you know what the best part is? Those holiday dinners together. Which I am really looking forward to.

Although in the interest of full disclosure, I should probably warn you guys that holiday dinners in my family can be a bit Felliniesque. By which I mean that if a hairy-chested 400-lb. guy in a tutu with a trained monkey on his shoulder showed up on our doorstep, nobody would bat an eye.

On the positive side, though, throughout the entire afternoon women of a certain age would be coming up to you and sweetly brushing your cheek and saying things like, "Oh! You are so normal! Are you single? Because my daughter/granddaughter/niece is!"

(Granted, I should also probably warn you that in my family, "single" can sometimes mean, "I can't stand the guy she is currently dating." And one of those guys may technically have an nth degree black belt and be a martial arts instructor. And no, I am actually not making that part up.)

On the plus side, however? Free booze. Which has to count for something.

And so in closing, Sounders guys, I think I'm going to adore being your new mom.

See you at Christmas. With orange slices.

With much love, plus high hopes that this note will not trigger a restraining order,