Share All sharing options for: No Offense, but...Tyrone Marshall?!? 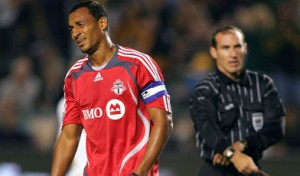 To show what the Sounders have just gotten, I tried to find the video of new Sounder Tyrone Marshall breaking Kenny Cooper's leg back in 2007. No go. MLS is good with videos of Cooper being the Comeback Kid, but apparently not so hot on videos of what, exactly, he needed to come back from.

I believe that leg break was the final straw that caused the Galaxy to trade Tyrone to Toronto FC before Beckham arrived. That never made a whole lot of sense to me. I mean, if you're paying the money to bring in David Beckham, don't you want the leg breakers on your team?

(If they'd put Adrian Serioux in a Galaxy jersey, think Beckham would be staying?)

But anyhoo. Tyrone joins Pete Vagenas on the "players from Sigi's LA years who are now on the Sounders" list. You'll remember (or maybe you won't) that Sigi got dumped from LA in 2004, when LA was in first place, because LA management thought the team's play was boring. No joke.

(So. LA. How's that "entertaining style" workin' out for ya?)

Still, the Marshall acquisition makes me wonder: What's Sigi trying to do here?

Don't get me wrong. I've always liked Tyrone Marshall. He's a talented central defender. But the guy is 34 years old! I'm guessing he's lost a step or two since the last time he played for Sigi. (In fact, I remember that being a point of discussion after the leg break -- about whether Tyrone's aging legs had caused him to get beat, which led to that really ugly tackle.)

But maybe I'm wrong. I'd like to be wrong, and I haven't actually paid a lot of attention to him since he went to Toronto. Maybe he's found the fountain of youth and plays as well as he did five years ago. Since it's the preseason, we'll give him the benefit of the doubt. So Welcome to Seattle, Tyrone! Hope you like the rain! (And snow. And whatever.)

Details from the Seattle Times:

Marshall played five-plus seasons with the Galaxy, 2002 to 2007, and was a two-time MLS All-Star and a member of the Galaxy's MLS Cup-winning teams in 2002 and 2005. He spent three seasons with Schmid as his coach.

Marshall, 6 feet 2, 195 pounds, has appeared in 248 career MLS regular-season games, starting 221 in 11 seasons. He has 13 goals and 17 assists for his career. Marshall was drafted out of Florida International University by Colorado in 1998, then traded during that season to the Miami Fusion (no longer in MLS), where he played through 2001.

The allocation money that is part of the deal allows an MLS team to spend cash on obtaining international players, as an example, and is outside of the team's salary cap.