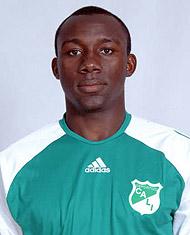 So let's write about our newest signing, yet another Colombian, Jhon Kennedy Hurtado. Yes, "Jhon." And "Kennedy." (Kennedy being, I believe, a traditional Colombian name.)

Jhon is a central defender, coming to us from Deportivo Cali in Colombia, where he was once teammates with our other Colombian, Fredy Montero, who is my "how the hell did we get him?" signing of the year. (Seriously, he's a Colombian international. Young. Talented. Not past his prime or broken down. The kind of kid who hardly ever comes to MLS, even on loan. And who may well eventually go elsewhere, where there's more money. But at the moment, he's here, with us. And I'm hoping we'll make the most of it.)

I know next to nothing about Hurtado, except that the fact that we've signed both him and Tyrone Marshall out of nowhere in the last week means that Sigi was not comfortable with our central defense options.

"Jhon has good speed, he's a good man-to-man marker, a good tackler and uses his speed to close people down," Sounders FC technical director Chris Henderson said in a statement from the team. "We had a chance to see him play two or three times, plus some video. We're excited to have him join our team."

I have to say, coming from the perspective of a Galaxy fan who's watched the club make some of the most bizarre signings...

Well, these seem so...rational. Which makes me wonder what I'm missing.

I'm hoping it's just a matter of switching my brain over into "Seattle fan" mode.

*It's an old song. And yes, kids, I'm pretty sure they were talking about soccer players. Just like us.