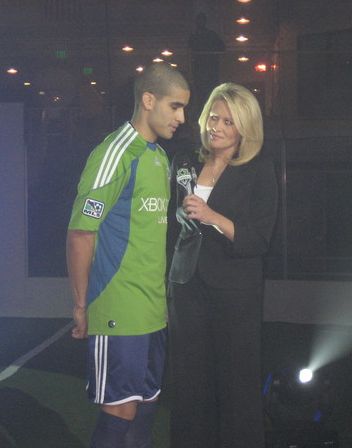 (Oh, damn. So much for my resolution to run this blog in at least a semi-classy way now that I'm blogging on my hometown team. I had planned to blog in this blog as if I might run into each of these guys in the 7-11. But...no. Sorry Vini. Sorry, Sounders. But as least I haven't posted any of Freddie's undies shots. Yet.)

Congrats to new Sounder Vinicius "Vini" Oliveira, who won the Sounders Super Search last night after the Super Bowl. A couple of thoughts:

1) Congratulations, Vini! You're talented, your mom is adorable, your girlfriend (or whoever was up in the window) is adorable, your brother in the Ronaldinho shirt is adorable, and we're proud of you. (Plus anybody who watched the show knows that there's no way you were attempting to look down whatshername's shirt. It's just the photo angle.) Now get out there, do us proud, and win that starting spot.

2) What. The. Heck. Was this program all about? Did anybody else fine the whole thing kind of...bizarre? And by "bizarre" I'm pretty sure I mean "pointless."

Anybody else thinking that the play on the field in the 2v2 and 1v1 last night had pretty much nothing (or less than 1%) to do with the final results? This was all about Sigi & Co. making up their minds beforehand based on longterm play and openings in the squad, and then making it happen. (As any good coach would.) So why pretend it's all down to performance in two short, tiny-field scrimmages?

Okay, given, it might have been a lot more interesting if NBC hadn't spent WAY too much time interviewing the @#$%ing Steelers, cutting into the available time. (Not that I'm still bitter about the last time these guys were in the Super Bowl. Or anything.) Originally I think KING 5 and the Sounders were hoping for a full hour, but had to make do with 45 minutes. Maybe it would have been more...um...enthralling...if they'd had the extra 15 minutes.

And I will admit to not being a reality TV fan. That's part of it. But come on. When the guys are slowly jogging up and down a short field for five minutes and Kasey Keller is trying to up the suspense by saying something like, "And now that it's getting close to the end, this is where they're really feeling it. This is where fitness comes in..."

Was anybody else thinking, "Uh-huh. If that's the case, let's hope they don't ever have to go 90 minutes at Qwest."

Don't get me wrong. I love Kasey Keller, and I like the elder statesman role they're putting him in. But it just felt like everybody was going along with the farce that this was how they were choosing the next player because it's the only way soccer can get a solid 45 minutes of coverage on network TV. Which I guess is an okay reason, because I'm all about increasing soccer coverage in the US.

I love the idea of open tryouts. I love seeing an outsider get a shot.

The reality TV part, though? Not so much.

Or maybe I'm overreacting. What do you think? If you were doing this again next year, would you keep the format or change it?