I Love This Ad

Share All sharing options for: I Love This Ad 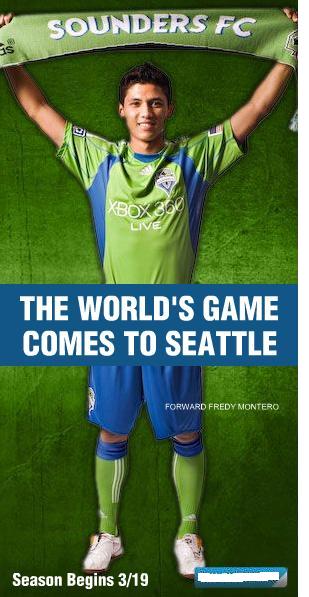 I was over at the Seattle Times site tonight, and this ad was on the main page.

In case anybody doesn't recognize our model (or can't read tiny white print), believe me, you will recognize him after the first few games. This is The Truly Adorable Fredy Montero. (I'm pretty sure that will be the actual name on his work visa.)

I absolutely love the fact that they're using Montero and not Ljungberg. Nothing against Freddie with a -die, but can you imagine LA using anybody but Beckham in a major ad?

And yes, I promise that I will someday stop comparing the Sounders to my first true MLS love, the Galaxy. It's just that there have been so many times in the past two years where I found myself thinking, "Wouldn't it be nice if they did it this way instead?" But they never did. But now Seattle is actually doing these things.

It's kind of bizarre, to be honest. But in a good way.

(The inexpertly whited out part at the bottom is a "buy tickets" link in the original. This is -- obviously -- just a screen grab. Didn't want anybody to get confused and then yell at me because the tickets link didn't work.)