Bring It On, Columbus!

Share All sharing options for: Bring It On, Columbus! 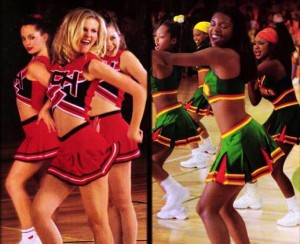 Tomorrow is roster compliance day, meaning that we're going to be seeing some cuts. Will somebody please sneak into Sigi's room tonight and whisper, "Keep Levesque! Keep Levesque!"

I'd do it myself, but my attorneys took a look at the wording on the restraining order and advised against it.**

In the meantime, to take our mind of these things, I'd like to bring your attention to a little something discovered by Josh over at The Beautiful Game, found on a Crew Supporters' Board:

I and a few friends of mine are of the opinion that Seattle Sounders FC sucks for a lot of reasons.

Not so much the Sigi thing, but the fact that you have these weak supporters out there in Seattle who couldn't support their club in USL, but then you get a comedian, a Microsoft trillionaire and a producer together to buy them a club and now they are going to fill half an NFL stadium with latte sipping soccer moms to watch an underwear model in a neon kit run around on plastic grass to the tune of Gary Glitter played by a f'in marching band.

Seattle has no soul and it's not what ultras culture in North America should be about . . . in our opinion.

1) Wow. Losing a coach has made somebody very cranky --OR--

2) All that money and attention flowing our way is enough to make some people a wee bit jealous,
--OR--

** You know, I really shouldn't even joke about these things. Combine them with the groin injury humor and my penchant for posting photos of players in their underwear, and someday it will come back to bite me.