Share All sharing options for: Seattle Ins and Outs 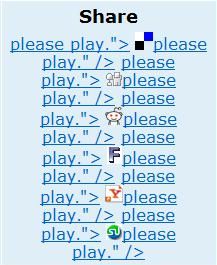 (The photo to the left has nothing to do with the rest of the post. It's just a screen grab of some kind of bug in the "Share this post" area of yesterday's "Please name our players" post. For some reason it makes me giggle every time I look at it. Because...wow. I'm really desperate.)

But anyhoo. Some changes in the makeup of the roster and trialists, as reported in the One True Official Site.*

(And what does it say about me that my stomach knots up when I read headlines like this? I don't want to see anybody cut. I am such a freakin' mom.)

Freddie Ljungberg made his first appearance at training today. Some other additions to the training roster since returning from the Argentina trip were:
M Peter Vagenas, who worked on the side.
F Jarrod Smith, who worked on the side and will start the season on the injured list.
D Jhon Kennedy Hurtado, who signed just before the club left for Argentina and joined the team in Buenos Aires.
M Ely Allen, who joined the team in Argentina after his release from the LA Galaxy. A UW product and Kent native.
F Kevin Forrest, who trained with the team in Seattle before the team left for Argentina. A UW product and Edmond native who played for the USL Sounders last year.
D Mike Randolph, who was released by the LA Galaxy last week.
M Tom Taiwo, who is on trial. He is 19 and from the Chelsea system. He played four games on loan to Port Vale last year.

I've apparently done a good job of viewing the trialists as chickens,** because the named cuts don't hurt all that bad. Best of luck to all of these guys in USL and/or in someplace sunnier than Seattle, where I got two inches of snow yesterday.

Also, this UW alum is really happy to see both Kevin Forrest and Ely Allen still in the running. (Plus Ely lays claim to an entirely different portion of my maternal area by being a former Galaxy guy. He's currently sharing the spot with fellow former Galaxy player Mike Randolph.)

Also, wasn't Kevin Forrest in and out once already? Now he's apparently in again. Crossing my fingers he can stay here. Except that...wouldn't this put him in direct competition with Roger Levesque?

And in case you were wondering, Tom Taiwo is apparently no relation to one of my favorite Ligue 1 leftbacks, Taye Taiwo of Marseille. But probably nobody cares about that but me. And I'm really kind of depressed, because to determine this I did both a google search and a google image search. And...well, DAMMIT! Now all of a sudden this little chicken has a name.

Laurie's addendum to Tolstoy: I hereby solemnly vow give you the most unofficial damn site I am capable of giving you.

**As I've said before: Laurie's "Trialists = Chickens" approach to the preseason: Do NOT give them names, or your heart will be shattered the second their little heads roll off the chopping block.

And on that happy note, I leave you.