Share All sharing options for: DON'T PANIC About Fredy Montero 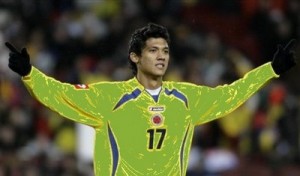 Ives over at Soccer by Ives is reporting that our ace in the hole, The Truly Adorable Fredy "How the Hell did we get him" Montero is in South America dealing with contract issues. He also reports the heart attack-inducing news that Fredy has been "removed" from the Sounders FC website.

I love Ives (he's a must-read for anybody following MLS, along with Steven Goff) and he has great inside sources. His facts are generally extremely solid.

Will Montero be playing next Thursday? No idea. I hope so. But until wehear otherwise from the Sounders? (Who seem to be really good about communicating with fans and media, unlike some teams who shall remain nameless)

Because it's a lot better than the alternative -- that the answer to "How the HELL did we get him?" is actually, "We didn't."

P.S. It's not too late to guess your Sounders. Just sayin'.