Fredy Montero, Zach Scott, and We Have a Winnah!

Share All sharing options for: Fredy Montero, Zach Scott, and We Have a Winnah!

I am in the process of doing some serious procrastination at the moment, so I thought I'd take the opportunity to share two happy bits of news from the Seattle Times blog. (I know, I know, I'm using the hell out of Jose Romero today. I'll be more creative this weekend. I'm almost sure of it.)

Fredy Montero was returning to Seattle as I did my interviews after the game, I was told, and I expect he is back with the club now. Contracts have been finalized for both Montero and Jhon Kennedy Hurtado. They have officially been added to the roster and are eligible to play the Sounders FC season opener on March 19.

Lastly, Zach Scott appears to have earned a contract with the club, his two months of hard training with the team paying off. There is a report in the Maui News of Hawaii, where Scott is from, that he has signed, but the team has yet to make it official.

Both of these items make me incredibly happy, but especially the Zach Scott news, because I'd about given up hope of any more USL Sounders making the team.

Zach Scott-related aside: Either last year or year before, I was sitting behind a couple of girls who were screaming and yelling and waving signs for Zach. Turns out that when he wasn't a USL Sounder, he was their coach. I'll bet they're screaming their heads off at this news.

(Just for the record, Sounders decision makers? You can't overestimate the power of local connection when it comes to local love of the team.)

(Also, if you're Zach Scott, or one of those girls, and you're reading this and thinking, Huh? Okay, so I'm only approximately 82% sure it was Zach Scott. It's not like I was taking notes. But it fits my narrative to write it up this way, so just cope, okay?)

Also, we have a winnah! I would like to thank Ron for identifying our Sounders, thus saving me from an eternity of posting the photos of Osvaldo Alonso, Jhon Kennedy Hurtado, and Nathan Sturgis over and over and over again. And oh! Look! Someone else is happy too! 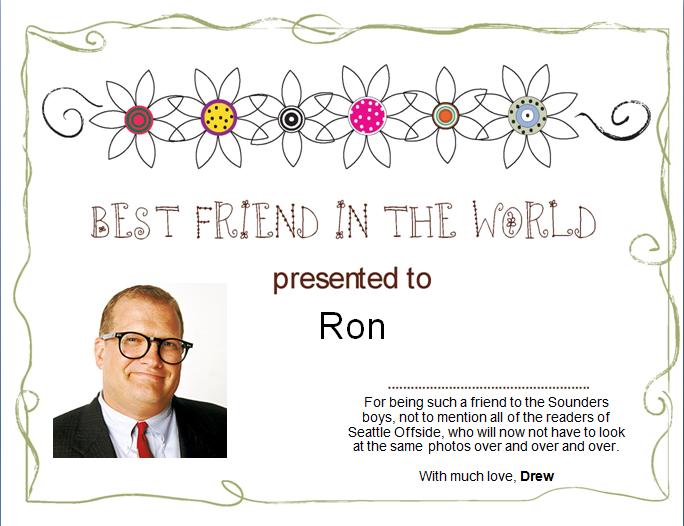 Click here for better res, etc. And I know, I know, it's kind of lame. Meaning it's not female ninjas. But for some reason the Best Friends Award just cracked me up. And I was actually going to do one filled with scantily-clad women, just out of gratitude for the fact that you responded, but then I realized that for all I know, you might be a priest or something.

And since I fully expect all of you to print these out and post them on your walls? Well, Ron, in my mind I save you from all kinds of embarrassment.