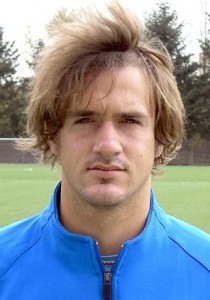 So earlier today, I had this to say about our former USL guy and new signing Zach Scott:

"(Just for the record, Sounders decision makers? You can’t overestimate the power of local connection when it comes to local love of the team.)"

Well, apparently the Powers at Sounders FC have gotten the message, because the latest word is that Roger Levesque will be offered a contract too!

My maternal area has just gone all soft and mushy. Seriously, you have no idea how happy this makes me! I remember back when we were awarded the expansion franchise in 2007, and the USL Sounders threatened to pull the plug on the team for 2008 if they weren't allowed to retain a fair number (I read 5-8) of the USL Sounders for the MLS team. And this was just after that magic 2007 season, where they not only won the USL Cup, they also beat two MLS sides in the US Open Cup, and almost beat the third. The squad had such great chemistry, and I remember thinking how fantastic it would be to keep a whole group of them together.

And then 2008 happened, which wasn't as magical. And then the actual roster started being built this year, and it didn't seem there was going to be much Seattle USL presence at all.

Now, though? With Zach Scott and Levesque? Rather than feeling like a collection of good players gathered together from other places and called a "Seattle team," this team feels a bit more like Seattle. A bit more like home.

And to close (just so there is something on this blog today that wasn't simply swiped from The Times' blog) here's my favorite quote from Roger, New Year's 2008, discussing his regrets from 2007:

"Roger Levesque, star forward of Seattle Sounders: ‘Regrets: Not taking full advantage of the ‘Buddy the Elf’ costume my sister bought me for my birthday early in ‘07, shaving my mustache (I was way cooler when I had a mustache), and calling my mom while riding in the trunk of a car — an unbelievably bad idea.’ "

(And this is me, officially swearing off grabbing news from Jose Romero at the Times for the entire weekend. But...thanks, Jose! You made my weekend.)