Jeff Parke Becoming a Sounder After All?

Share All sharing options for: Jeff Parke Becoming a Sounder After All? 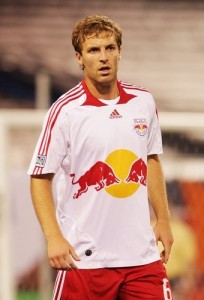 So I go away for the weekend, and I come back and discover that our backline is not as set as I thought it was when I left. Seems our prodigal central defender, Jeff Parke -- the expansion draftee who was working on getting a contract in Europe-- may become a Sounder after all.

No point in making this, y'know, personal or anything. It's nothing whatsoever like the guy you asked to Tolo/Sadie Hawkins/whatever, but he kept putting you off and making you wait for an answer till it became clear that the cheerleader was going to ask the football player and not him, at which point he said yes. Nothing at all like that.

Because I'm pretty sure they don't even have cheerleaders in Belgium.

But Jeff is back, and played in the Sounders reserve game against Concordia University, which the Sounders Reserves won 5-0.

I'm sure everybody is aware by now that Parke is serving the remainder of a 10-game suspension for using "performance-enhancing drugs," which he says were legal supplements tainted -- unbeknownst to him -- with substances banned by the league. Chances are that the dark cloud coming from the suspension was probably the main reason he wasn't able to land a European contract. (Also suspended was Red Bulls keeper Jon Conway.)

Ives Galarcep at Soccer by Ives has a two-part interview with Parke that's worth a read for anybody trying to make sense of the situation. (Also be sure the read the comments. Red Bulls fans sure seem to want him back.)

It's hard to read the interviews and not feel for the guy. I wish him the best, even as I'm wondering if Seattle is where he really wants to be. (Kinda hard to tell that from the interview, isn't it?)

But if he's coming on board here, there's one big question: Who does he bump from the roster, and potentially from the starting lineup? Not going to prejudge, but I really liked Hurtado and Marshall on Thursday.

(Bracing my maternal area here, 'cause this is gonna hurt.)