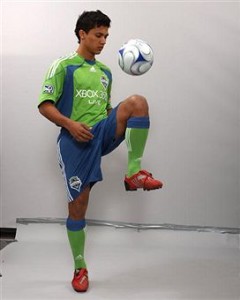 So I was over on The Offside's Main Page yesterday, checking out this post, which lists approximate annual, monthly and weekly salaries for the 50 highest-paid footballers in the world. Here are the top few, just fyi.

Obviously, I'm not implying that we have any players anywhere near this level right now. (One great game does not necessarily equate to a season of consistently strong play, and MLS is not Europe.) I just want everybody to see what we're up against when it comes to retention of good players.

Because when you compare this list to the salaries available for MLS players under the rumored $2.3m salary cap (per team, with $400,000 of the Designated Player's salary counting towards that) it does kind of give you a queasy feeling in your stomach, doesn't it? That $2.3m would buy about a third of one of the top players in the world.

(For comparison purposes, again, here our our players' salaries.)

Of course, our ace in the hole in MLS is the Designated Player situation, where we can compensate one player outside the salary cap, paying him as much as the owners want to pay him. That player is currently the other Freddie.

(You know. Swedish gent? Models underwear? Used to play for Arsenal? Yeah, that guy. Who will probably get the chance to show us what he's got this weekend.)

It is possible to purchase a second DP slot from a team that's not using theirs, but they don't come cheap. And as someone who was a fan of the Galaxy for the past two years when they had two (and at one point three) DPs, I can't say I recommend this tactic. The second DP counts as $325k toward the salary cap, which means that $725,000 of the cap is tied up in DPs, which really doesn't leave a lot of room to build a solid team with. What LA ended up with were a lot of green rookies and just-slightly-past-their-prime older players. Not coincidentally, they missed the playoffs both years despite strong effort by Landon Donovan. (And occasionally even David Beckham.)

So what does this mean for Seattle? I don't want to look too far into the future, or to count chickens, but if, (just if) a certain Colombian player were to play all year like he did last Thursday...

What do you think would happen?