Share All sharing options for: Kevin Forrest Signs, and the Roster Moves Forward 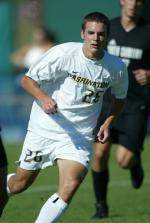 There is a happy place inside me today that is celebrating. Kind of the spot where the maternal area meets the alumnal area.

Although technically I only did grad school at UW, which in my mind kind of makes me only a partial alum. Because I'm pretty sure that unless you have hauled drunken dormmates back to their rooms by the hair and belt loops after a football game, you can't really claim to be full-fledged.

But anyhoo. Congratulations fo Kevin Forrest, formerly of Seattle's own University of Washington, for being the latest players officially signed to the roster. A roster which is, apparently not yet full, despite kind of having a full complement of 24 players.

From the Times blog:

That's 23 on the roster, 24 when Jarrod Smith gets back from injured reserve and back form New Zealand.

So where does Jeff Parke fit in? It's not like he's gonna take that last developmental slot. Meaning low salary and under 25 kind of thing, given that he's 27 (as of yesterday) and made $58,000-ish last year.

But happy birthday anyway, Jeff. Hope it works out for ya.