Share All sharing options for: To Direct Kick or Not to Direct Kick? That is the Question. 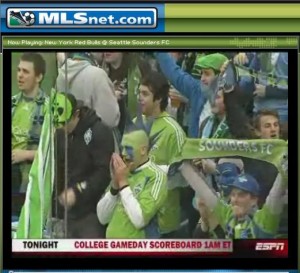 First of all? We are amazing.

I was over on the MLSnet site this weekend and ended up forking over my $19.99 for this season's MLSnet video service so I could watch us As Seen on TV. If you happen to have the spare cash, I think it's worth it. (And I think this is true even with the amazing KING and KONG televising every single freakin' game that's not nationally broadcast.)

I'm in the process of working my way through last Thursday's game video, slowly. I haven't even gotten through the first Fredy Montero goal yet -- probably because I was having so much fun watching Alexi Lalas and David Beckham snark at each other through intermediaries during the pregame show and couldn't make myself forward through it to get to the actual game.

But also becase I want to savor it, y'know? Like fine wine. Because this game ain't screw top. This game is pull-out-the-corkscrew-and-sip. It's fascinating to experience it like everybody else in the country experienced it -- through watching us.

But now that I have the video service, I'm trying to decide whether to fork over another $80 for Direct Kick on Comcast so I can watch games on TV. The frugal part of me is saying, "This is exactly the same service you just bought, except on TV! It's redundant!" And the self-indulgent part is saying, "But...but...it's on TV!"

I'm mentally trying to figure out precisely how many games I'll watch (or, more technically, how many games I can watch without completely alienating the rest of my family by hogging the television when they really don't want to spend a Saturday night watching Chivas vs. Kansas City, the whiners) and dividing that into $80 to see if the dollars-per-game figure is worth it.

I'll let you know what I decide. Because I just know your life won't be complete until this story has an actual ending.