Share All sharing options for: Buh-Bye to Jeff Parke 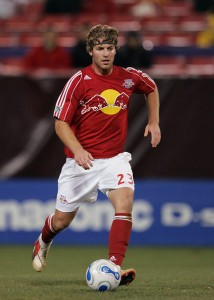 According to Jose Romero over at the Seattle Times, Jeff Parke and the Sounders have parted ways. The press release says it was the player's decision, and that Sounders still hold his MLS rights. (So if he wants to play for any other MLS team, that team will have to give up something of value to purchase him from us.)

Raise your hand if you're surprised that he's gone.

You, over there? No? Just scratching your elbow?

Yeah, me neither. You don't waltz off to Europe and then waltz back when the team is almost fully-formed and say, "Okay! I'm back! Time for me to play now!"

The team picked all of the expansion draft picks with the expectation that they'd be here when the time came. Parke made the choice not to be. (Which he had every right to do. Can't blame him for grabbing at the brass ring.)

But as the preseason got started, there was a bit of a flurry because the Sounders didn't have the strength in central defense that they needed. Enter Tyrone Marshall and Jhon Kennedy Hurtado. If Parke had shown up at the beginning of February ready to pull on his cleats and be a Sounder, one of these guys would not be here. But they're here now. And Parke is not.

Things might be different if Hurtado and/or Marshall hadn't been up to the task last Thursday. But they were, and then some, which really left no room on the roster for another experienced, talented central defender.

There's an video interview with Sigi somewhere over on The Official Site, from right after Parke arrived, where he talks for a minute about the situation. He says something like, "It's great to have him here. It would have been great to have him hear two months ago." That was when I got a feeling for how this would end.

Made me realize, yet again, that Sigi is no pushover. And that's why we have an actual shot at being the first expansion team in ages to make the playoffs this year.

Best of luck, Jeff. Somewhere else.