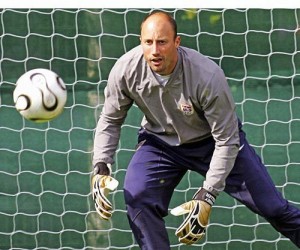 1) Yet another Sounder is Player of the Week. This time it would be our Kasey Keller.

We could get jaded if this keeps up. But I'm pretty sure it would be nicely jaded.

2) We need to prove our ability to vote. Again. For Fredy Montero. Again. For goal of the week. Again. Go here and vote as often as possible. Fredy is currently leading with 71% of the vote, but don't get complacent. See #3.

3) Speaking of Sounders needing our voting fingers, remember last week, when we came roaring back in the song contest after going down early to teriyaki?

Apparently we got complacent. We're not just behind now, we're WAY behind, and the Sounders need us again.

Because teriyaki may have folded without a fight, but the Bring Back the Sonics people seem to be lobbying with a vengeance. They are bringing people out of the woodwork to vote, and they are currently leading, 1543 to 811.

Here's the thing, though. If you've already voted, chances are it won't count if you vote again. The rule seems to be one vote per IP address, at least for some unspecified period of time. (But right after I typed that, the system made a liar out of me by accepting another vote. So be sure to try.)

What this means, though, is that you're going to need to go get your friends, family, office mates, the people on all the library computers, and the random guys playing Team Fortress 2 at Starbucks. Round all of these people up, then send them to this site and make them vote.

Or wait. Actually, send them to THIS site. My site. Because basically? I'll do anything for blog hits.