Share All sharing options for: MLS 101: US Open Cup Time! 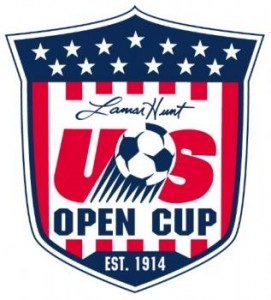 Tickets are now on sale for the April 28 first game of the Lamar Hunt US Open Cup against -- yet again -- RSL. (Starfire, not Qwest, so buy early. Only $15.)

I love the Lamar Hunt US Open Cup. Just want to state that right off. And I can say this with a straight face even though I didn't actually realize that DC United was the team who won it last year, given that I kind of lost interest after the Sounders were eliminated.

Open Cup dates back to 1914, and it's the one competition in the US where any club can compete, from amateurs up through MLS. So in the early rounds you'll see the teams like Hollywood United (current chair Anthony LaPaglia, former first teamers include Alexi Lalas, Eric Wynalda, Ziggy Marley, Frank LeBoeuf and Vinnie Jones.) And yes, that would be the same Hollywood United who last year beat the USL's Portland Timbers on penalties (snicker) before losing 6-0 to Seattle (double snicker.)

(Recap of how the early rounds are set up is here.)

USL Sounders had a history of doing fairly well in the Open Cup. The tourney is set up so the lower-level (sub-MLS) teams will eliminate each other down to the last eight before MLS teams even really get into the competition, and USL Sounders were pretty good in recent years at knocking off lower-level teams and advancing to play MLS.

In the magical 2007 season, they got to the final sixteen, then knocked off Chivas USA 3-1, then Colorodo 5-0 before finally falling in an abysmally reffed game to a diving, unsportsmanlike FC Dallas in extra time in the semis. (Not that I'm still bitter about that game. Or anything.)

Last year they beat Chivas USA again, then the Kansas City Wizards on penalties before falling to the Charleston Battery, another USL team, in the semis.

The thing about US Open Cup -- and one of the reasons USL teams have historically done fairly well against MLS sides -- is that these MLS sides frequently don't field their best players, at least until the final rounds.

Last year, in what I'm guessing was an attempt to make teams take the competition more seriously, the powers that be decided that the winner of the competition would automatically get entree into the CONCACAF Champions League. Still waiting to see if that works and, given things like schedule congestion and small roster sizes, if it's even a good thing from a cost-benefit perspective. One of the theories as to why neither DC United nor Houston Dynamos did as well as expected last year was that they were so bogged down in extra competitions that they couldn't give their all to everything.

Which leads us to the question: How seriously is Sigi going to take the US Open Cup given that this team actually has the potential to be contenders in the league? Is he going to risk injury to the starters he needs in league competition for a Cup game (which is actually just a qualifier to try to be one of the eight MLS squads in the final Cup competition), or is he going to give a shot to some of the players who aren't regular starters?

I'd guess the latter. I'm guessing we'll see a few starters, but not Freddie, and I'm thinking Fredy may sub in but won't start.

What's funny is that last year I really thought MLS should take this more seriously. But now that our team is MLS, I'm thinking a go-slow approach is best.

Plus how fun would it be to see Roger Levesque playing a full game that actually matters?