Share All sharing options for: I'm Pretty Sure this Doesn't Actually Qualify as a Seattle-KC Preview 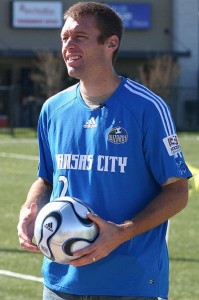 So I'm sitting here, digging into the recesses of my brain, thinking, What interesting things do I know about the Kansas City Wizards and their players?

And I'm coming up with a pretty big nuthin. Seriously, this team has just never registered with me, either positively or negatively. I think this is the only team I can say that about. (Colorado is close, except that I'm originally from Denver. Plus the Rapids have to play in the stadium whose name abbreviates to "The Dick," so that pushes them into the positive zone based on sympathy alone.)

Yes, I do like Jimmy Conrad, pictured. Who doesn't? He's not only a very solid defender, he's great about doing interviews. He even offered one up last year to our Red Bulls blogger, Dave Martinez.

And I like goalkeeper Kevin Hartman, "El Gato." Although I don't think he's anywhere near as good as Kasey Keller.

And I'm pretty sure that if I were to dig out my "diving SOBs" list, Herculez Gomez might be on there somewhere. (Wait. Did I just say that about a former Sounder? I'm pretty sure I didn't.)

Also, wait x 2. When did Gomez end up in KC? I am not kidding when I say this team doesn't register for me.

Other than that... Let's see. I'm thinking top goalscorer for the year Davy Arnaud should have made an impression enough over the years to create some emotion. Thinking...thinking...

Okay, fine. Guess I need to do some research. (Hate that.)

Except...wait a second. This may not be so bad. I go to the official KC Wizards website, and the first thing I see is this: "Go Inside the Wizards Locker Room." Great! Except...well, dammit. Audio only. And I'm pretty sure it wasn't even actually taped in the locker room.

(Are there not laws in Kansas about false advertising?)

But at any rate. Wizards are on three points, with all of those coming in their last game. We have nine. But as every intelligent person will tell us, every match starts out 0-0, and that's the only stat that matters.

And that's pretty much all my ADD brain is going to let me give you on this particular topic. (I guess I shouldn't have wasted so many brain waves on that locker room thing. Although I'm fairly certain that was really not my fault.)

But I will close with this: I don't know if they're doing this in the current season, but this Kansas City marketing ploy was either the The Coolest Marketing Ploy Ever Created OR What the Hell Were They Smoking? Or maybe both.

(And yeah, I know it's the second post in a week discussing amber liquids thrown at players. Because life is occasionally circular, returning you to the same point over and over. Or something.)

Oh, what, this post wasn't enough for you? You want a real preview? Fine. Go here, here, here here and here.