Share All sharing options for: El Gato Loves Us 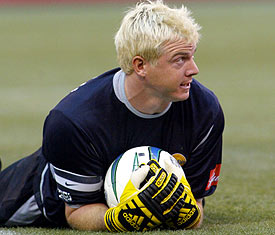 (On the type of atmosphere at Qwest field) "The support was amazing. When we were walking in, I thought that it was one of the most European places I have ever played. The turf is a little bit of a bugger, but it played pretty well. The fans were there to support and they were fair. They were knowledgeable fans; they weren't fans just there in mind. I thought they knew when to cheer."

(Why does this quote make me feel all warm and fuzzy inside?)