Question for MLSnet Video Subscribers: Can You See the Game? Because I Sure as Hell Can't

Share All sharing options for: Question for MLSnet Video Subscribers: Can You See the Game? Because I Sure as Hell Can't 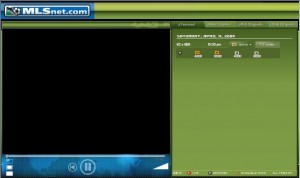 I was over at MLSnet this morning, thinking I'd catch a few parts of the game video. Because that would be why I forked over my $19.99. To, y'know, watch the games.

Must say I'm a little annoyed with MLSnet to begin with, given that they didn't even post our highlights till Monday afternoon, even though everybody else's were posted on Saturday night.

'Scuse me, MLSnet people, I know you're East Coasters and need your beauty sleep. But A) It's not our fault you live on the wrong side of the country, and B) if you post the West Coast's freakin' LA "SuperClasico" right away, it would not kill you to post our stuff too. Is all I'm sayin'.

But they did eventually get the highlights up. And it looked like at the same time they also posted the full match video.

I've been to the site in three different browsers and all I get when I try to watch the game at either speed is a blank screen. (Pictured, from a screen shot which I artistically titled, "Blank Screen.")

But know what I can watch? The afore-mentioned "SuperClasico." Because I'm all about watching replays of nil-nils of teams that aren't mine.

I am really annoyed by this, becase here I have a free half-hour-ish this morning and I was really hoping to find answers to questions like these:

a) Is Zach Scott really the weakest link, or will he be fine once there are eleven men on the field?
b) Is Fredy's penchant for holding the ball while dodging two and three defenders (rather than taking an easy pass to somebody who's wide open because all the defenders are on Fredy) showboating, or does it advance the game?
c) What's wrong with me that I'm just not as impressed by Brad Evans (especially when he plays out wide) as everybody else seems to be?
d) How can we sneak either Zakuani and Nyassi onto the field while not subbing anybody off without the officials noticing?

If MLSnet doesn't get its act together, I will never know the answers to these pressing questions, and my life will be the poorer for it. So if you're a subscriber, go here and then tell me: Can you watch the video?

(Because I've tried complaining to these guys before, and it's kind of like banging my head into a brick wall, except slightly more pointless. So I don't want to put the energy into a nasty letter and/or phone call if it's all me.)