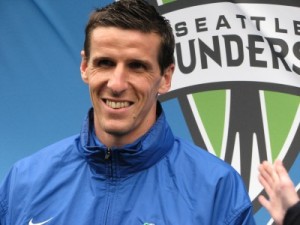 (And I'm pretty sure that we could do it a lot better, because to be honest, the French are kind of lame when it comes to cheering their NT players.)

Le Toux is French, y'know? I bet he'd appreciate it.

For the tune, you might be able to pick it up from this. (English guy and Spanish guy are close. Swiss woman, not so much.)

(And if this is already a chant, forgive me. It's hard to hear from where I sit.)

Oh, and this next video has nothing to do with anything. I just found it when I was looking for something like the above video, and for some reason it made me laugh.

Because, y'know, it's almost Friday.

(What's even more disturbing is that the videos that came after this were animations of "The Dumb Bunnies." And now THAT's two hours of my life I'll never get back.)