My Not-Much-of-a-Preview About Chivas, (aka My Secret Crush Team)

Share All sharing options for: My Not-Much-of-a-Preview About Chivas, (aka My Secret Crush Team) 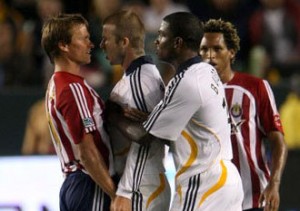 Good news and bad news as we head into this weekend.

Bad news: We are no longer atop the MLS Power Rankings. In fact, we have dropped to third. (Because apparently going down a goal three freakin' times in one game and then coming back and getting a draw -- as opposed to allowing only one goal in four games -- makes Chicago better than us.)

Good news: On the same page, there is a fan poll asking, "Which team has looked the strongest in the season's early weeks?" In a five-way poll, guess what percentage of the votes Seattle has taken? If you guessed 76%, you get the gold star. So take that, power rankers.

But obviously none of that matters now. On to the next game: Chivas USA.

By the way, if you happen to be in the LA area, Chivas are running a family pack promotion: 4 tickets, 4 hot dogs, 4 hats, as low as $58. Yeah, seriously.

Can't see Sounders doing that, can you? Chivas are, becuase they have traditionally been one of the have-not teams of MLS, quietly toiling in the shadows as their wicked stepsister/stadium-mate the LA Galaxy dresses up and goes to the ball. In 2007, average attendance for Chivas was 13,013, fourth-lowest in the league. In 2008 that dropped slightly to 12,479. (But because overall attendance dropped also, they were only fifth-lowest.)

I find this kind of sad, given that Chivas have been my secret crush for awhile now. (Don't tell anybody.) Now granted, I'm not talking about a throw your life away kind of crush. More of a take a peek when nobody's looking kind of crush. (Not that I would know anything about either. Or about this topic in general.) 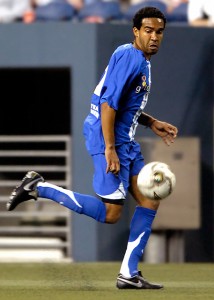 But what I mean here is that Seattle will always by my #1, but I find Chivas...interesting. I love Jesse Marsch (pictured fighting with Beckham, above.) Love former USL Sounder Maykel Galindo, pictured right, who was Osvaldo Alonso's inspiration when he defected from Cuba. Also love Paulo Nagamura.

And I've always like the way that Chivas don't go for the highly-paid superstars, and they take a lot of cast-offs from other teams, and they're usually way under the salary cap. Top-paid player on the team is Sacha Kjlestan at $203,000. (Pretty sure Beckham pays his manicurist more than that.) Yet they've done pretty well recently.

For the past couple of years I have been kind of expecting Chivas to explode into something big, maybe even make it to the Cup, but last year especially they were decimated by injuries. I'm not saying that this is the year, but I'm also not surprised to see them on top, and I wouldn't be surprised to see Chivas and RSL be the teams that give us a run for our money in the West.

This, of course, does not mean that I think they will beat us. But I'm almost glad Sounders had a loss before this and don't feel quite so invincible, because Chivas will put up a fight. Expect a hard-won, scrappy game.

As far as who will take the field on Saturday: Paolo Nagamura won't be playing after getting a second yellow in Saturday's game against the Galaxy, and Chivas injury list reads like a Who's Who. But some of these guys will be playing, particularly Eskandarian, who's always a scoring threat.

I'm not particularly sorry to see most of these guys not playing -- particularly Galindo, Suárez and Razov -- but remember that the team has been doing just fine without them up to this point.

Oh, yeah, one last thing: Last year, Chivas did a promo which involved players stripping on local television, making it either the best ever or most degrading ever promotion.